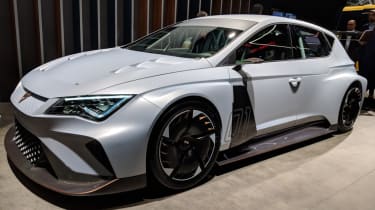 Although visually similar outside to the conventionally powered SEAT Leon TCR touring car, the e-Racer is 100% electric, promising over 400bhp of 'continuous power' and 670bhp of 'peak power' for short bursts.

The car's electric motor revs to 12,000rpm and it has a battery capacity of 65kW. Power is fed to the rear wheels through a single-speed transmission. 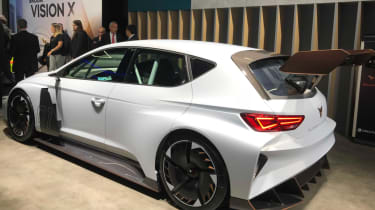 The e-Racer is just a concept for now, with no word yet on whether it'll be put into competition against conventionally powered racing cars, or form the basis of a fully electric one-make series, similar to the SEAT Leon Eurocup.

However, the promoters of the FIA World Touring Car Cup announced plans for a new 'E TCR' series around the same time as the e-Racer was unveiled, leading to speculation that it could be first of several TCR cars to spawn an electric version.

Cupra claims this is the first 100% electric touring car in the world, however a grid of electric VW Golf touring cars supported the 2016 FIA Formula E race in Hong Kong.

Elsewhere, Jaguar has already taken the wraps off a racing version of its I-Pace electric car, a series for which will support the full 2018-19 Formula E season. An 'Electric GT' series for race-prepared Tesla Model S cars is also in development, while the FIA World Rallycross Championship will switch to electric power in 2020.