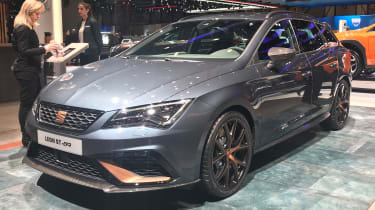 The Leon R ST Cupra comes with a 2.0-litre TSI petrol engine producing 296bhp. This power is applied via SEAT's 4Drive all-wheel drive system – an approach which is becoming more common with the class leading hot hatches. The transmission is a DSG automatic unit, as seen in various guises across the Volkswagen Group, which will help provide rapid gearshifts.

The Leon Cupra R ST comes with coppered interior and exterior features, including copper alloy wheels to help the car stand out in a packed sector of impressive hot hatches. Once more, the exterior is dotted with aerodynamic parts made from carbon fibre, reiterating its performance credentials. 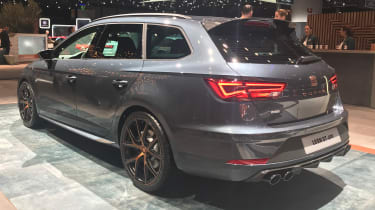 Prior to February's unveiling, SEAT’s sales and marketing boss Wayne Griffiths told us that he sees a gap in the market for “cool, fast cars”. He said many people who buy Audi RS or BMW M models “have something to prove” – but Cupra customers prefer to exercise restraint in the pursuit of performance and handling.

And speaking from the launch of the Spanish maker’s new Arona SUV, Griffiths also told us he’s looking forward to implementing his previous experience as he lays the foundations for a rejuvenated SEAT brand. The separation of Cupra will be a big part of the Brit’s strategy – as he looks to add more depth across the product range.

But despite wanting Cupra to find its own identity, he appeared keen to stretch its appeal in a similar fashion to Audi’s S line and BMW’s M Sport models. A “Cupra Line” could therefore appear on everything from the latest Ibiza and Ateca, to the forthcoming large SUV – whose name was revealed as the Tarraco. Cupra Line could build on, or indeed replace, FR and FR Sport trims, with subtle styling additions, racy personalisation options and more engaging handling. It’s unlikely these cars would offer any more power for fear of diluting the flagship full-fat Cupra models, however.

What do you make of SEAT’s plans for the Cupra brand? Let us know below...

Welcome to our Geneva Motor Show hub page, scroll down for all our Geneva content...
Visit New 2020 Fiat 500: full details on the new electric city car

The 2020 Geneva Motor Show has been called off after the Swiss government announces ban on public gatherings of more than 1,000 people
Visit New Koenigsegg Gemera is a four-seat, 1,700bhp, £1.4m hypercar