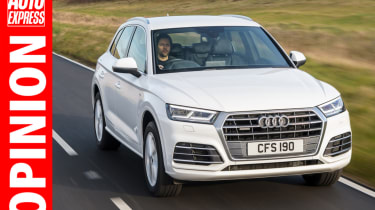 Before it’s too late, we need a proper ‘what to do about the diesel dilemma’ plan of action for ourselves, our country and our world. For starters, I’d argue a private motorist shouldn’t buy a brand-new diesel car today. Instead, lease (or hire, or borrow) it for 36 months max, thereby forcing the leasing company to worry about resale values, possible bans, etc, three years from now.

For the driver who’s already bought a diesel in good faith, I say keep it – for now at least. Then study the used markets before deciding to get rid of it, run it into the ground or break it up as it’ll be worth more in parts.

• Should I buy a new diesel car?

On a related point, VW has spent billions buying back thousands of diesels from customers. Many have already been crushed, but they should be dismantled. A bought-back car with a now-redundant engine still has a usable interior, sound system, wheels, tyres, body panels, etc. It’s called recycling!

Compromises are essential, so if you drive a diesel car to city centres that financially punish such vehicles, ask yourself if you really need to go there. My guess is that 90 per cent of us don’t. After travelling by car from the countryside or suburbs, try parking a mile or three from your final destination and perhaps consider doing the final leg by bike, public transport, walking or pogo stick!

Talking of compromises, how about a bold, symbolic gesture from the car manufacturing industry (the heads of which discussed diesel in depth in a previous issue of Auto Express), who will hereby volunteer to halt production of diesel city cars and superminis – in exchange for greater leeway with large saloons or SUVs running on the same stuff? Tiny, low-mileage, in-town runabouts (including small vans) just don’t need diesel. Big, high-mileage saloons, estates and 4x4s usually do. Let’s bite the bullet, admit this, then voluntarily cull some diesel production.

If you’ve got a big, allegedly dirty diesel and you’d really like to keep it, how about agreeing to park it for three days out of seven? It might even be that doing this is better for air quality than a petrol that runs seven days. Discuss.

• Diesel ban? The future of diesel cars in the UK and beyond

A third of trains still run on diesel. And millions of polluting buses, coaches, taxis, commercial/construction/agricultural vehicles and watercraft drink it in high quantities. Yet the above are rarely criticised for their Derv addiction.

How can it be ‘wrong’ when not-for-profit mums, dads and teenage kids buy a few drops of diesel for their fuel efficient family cars, yet it’s deemed ‘right’ for profit-obsessed public transport operators, cabbies, truckers, builders, farmers and ship owners to guzzle squillions of gallons of the same ‘filthy fuel’ for their notoriously noisy, inefficient vehicles?

Do you agree with Mike? Do you also think ending production of diesel city cars and superminis is enough?