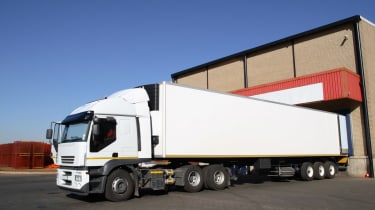 Tens of thousands of heavily polluting diesel-powered refrigeration generators are running on the UK’s roads every day, producing harmful emissions equivalent to roughly 1.8 million cars. They’re totally unregulated, and the diesel they run on is subsidised by Government to the tune of £100 million a year.

Transport Refrigeration Units (TRUs) are coolers that chill and freeze food in vans and lorries, making deliveries to supermarkets and convenience stores.

Around 34,000 of these TRUs are powered by generators running on ‘red’ diesel, so their fuel attracts duty of just 11.14 pence per litre, not the 57.9ppl of regular diesel. The unregulated status of TRUs also means the amount of nitrogen oxide (NOx), non-methane hydrocarbons (NMHC) and particulate matter (PM) they pump out is far higher not only than a diesel car, but also than a non-refrigerated HGV.

The UK will adopt EU legislation on TRUs in January, but the rules won’t apply to units already on our streets. They also allow new TRUs to emit as much as 14 times more NOx than a diesel HGV, and up to 40 times more PM. The Department for Transport says it is “determined” to improve air quality, and that forthcoming TRU rules “will mean new units are cleaner than before”.

The Department for Environment Food and Rural Affairs (Defra) and the Treasury have launched a call for evidence into the use of red diesel, but no plans have yet emerged to stop TRUs using the fuel.

We asked Defra why TRUs run on red diesel, and were told it “plans to make low-emission vans more affordable” and is asking businesses how they can “break down the barriers to the use of lower emissions machinery”.

The use of red diesel in TRUs is being defended by the £113billion UK food industry, with the Food Storage and Distribution Federation (FSDF) recently warning Environment Secretary Michael Gove that stopping the subsidy would add £100million to the cost of delivering food. Shane Brennan, FSDF chief executive, told us if the red diesel subsidy were removed, the result would be higher food prices for consumers.

Brennan added that while “innovation is vital” in cutting emissions, “for many operators there remains no market-ready alternative equipment for refrigeration”.

The £100million saving the FSDF says TRU operators get as a result of the red diesel subsidy means TRUs are using around 214 million litres of the fuel a year, emitting roughly 2.7 million kilograms of NOx and 8,600kg of PM as they do so – equivalent to around 1.8 million Euro 6 diesel cars. Lorries with TRUs are “dragging ‘puffing-billies’ round our streets”, according to Toby Peters, professor in cold economy at the University of Birmingham. He added that the red diesel dispensation means “we not only tolerate their disproportionate emissions, but also subsidise them”.

Peters said the new rules “will not lift [TRU] emissions standards anywhere near other modern diesel engines” and that “practical and deliverable” alternatives, like liquid nitrogen cooling, are moving from extended trials into first sales.

But he added: “Industries change when governments give the right signals. That’s what happened to the car industry. When you subsidise diesel, what hope do you have for alternative technologies?”

What do you think about the subsidised emissions from refrigerated HGVs? Let us know in the comments…