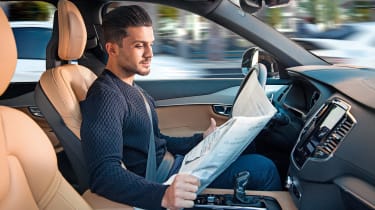 Two of Europe’s leading car safety bodies have warned driver assistance systems such as adaptive cruise control and lane keep assistance can give the impression to drivers that they are in an autonomous car.

Thatcham Research and Euro NCAP are concerned such systems, which are designed to assist motorists rather than drive for them, are being marketed as being semi-autonomous or self driving, as car makers seek “to gain competitive edge”.

A survey of over 1,500 drivers commissioned by NCAP and Thatcham found 71 per cent think they can buy a self-driving car today, while one in 10 motorists would consider taking a nap when using assistance systems. Just 51 per cent of drivers thought they would be responsible if their car crashed when using assistance systems, while 18 per cent considered a car being capable of automatically steering, braking and accelerating meant they could ““sit back and relax and let the car do the driving”.

Thatcham and NCAP point to several manufacturers’ marketing materials, with Mercedes saying its C-Class is “able to drive semi-autonomously in certain situations”, and the BMW 5 Series being referred to as offering “Semi-autonomous driving due to Driving Assistant Plus.” Telsa, Volvo, DS and Audi are among the other car makers singled out.

Adaptive cruise control (ACC) matches the speed of the car in front, while lane keep assist (LKA) will steer a vehicle within lane markings. Used together, these systems may give the impression a car can drive itself; the reality, however, is quite different.

Some ACC systems are more adept at managing various road scenarios than others, however. The DS 7 Crossback and BMW 5 Series, for example, were judged to leave the driver primarily in control, while the Audi A6, Ford Focus, Mercedes C-Class, Volvo V60 and Nissan Leaf were judged to offer “a balance between driver and system assistance”. Conversely, the Tesla Model S’ adaptive cruise system was judged too effective, and “risks an over reliance on the assistance system with the vehicle being primarily in control.”

Those were general assessments, however. Euro NCAP also developed taxing tests that asses how effectively ACC handles cars cutting in ahead of a driver, or moving out of the way quickly to reveal stopped car ahead. The safety assessors found when it comes to the cut-in and cut-out tests, “all of the cars were found to be seriously lacking.” Thatcham added that “none of the systems were able to help and crashes could only be avoided if an alert driver braked or steered away from trouble.”

Lane keep assistance systems were put through similarly rigorous test. This involves sending the car through an S-bend, with the LKA doing the steering. All the cars assessed “allowed the driver to cooperatively steer and manage the situation apart from the Tesla.” The Model S, Thatcham and NCAP found, “does not allow the driver to deviate from the lane centering path and will disengage when a driver inputs steering torque”.

As well as the differing capabilities of various ACC and LKA systems, Thatcham and NCAP are also concerned these technologies are being over-marketed. While the researchers considered that “Generally, official marketing content is clear in what the role of the driver is”, they highlighted a promotional video for the BMW 5 Series they considered “misleading”, as “the driver takes their hands off the wheel where it is assumed that the vehicle can drive autonomously”. Thatcham was also critical of a number of pieces of marketing from Tesla, which “suggest vehicle autonomy”.

Commenting on theses assessments, Matthew Avery, head of research for Thatcham, said: “Some carmakers are designing and marketing vehicles in such a way that drivers believe they can relinquish control. Carmakers want to gain competitive edge by referring to ‘self-driving’ or ‘semi-autonomous’ capability in their marketing, but it is fuelling consumer confusion. This is exacerbated by some systems doing too much for the driver, who ends up disengaged.” Avery said the message he wanted to get across is that “today’s technology supports the driver. It is not Automated Driving and it is not to be relied upon at the expense of driver attentiveness.

He added: “The driver is in control and must always remain alert. If used correctly Highway Assist systems will improve road safety and reduce fatalities, but they won’t if naming and marketing convinces drivers that the car can take care of itself.”

Commenting on NCAP and Thatcham's findings, Mike Hawes, chief executive of the Society of Motor Manufacturers and Traders, said: “Safety is the number one priority for car makers, which spend billions developing technology that mitigates driver error, reduces accidents and saves lives.

"Many new cars are now available with advanced assistance systems where the driver must remain in control at all times, including lane keeping assist, blind spot monitoring and emergency braking. Such systems are already making our roads safer and are expected to save 2,500 lives by 2030.

We understand this survey found that 118 people in the UK believe they can buy ‘a car that drives itself’ today, but as most would accept, fully self-driving cars are still a long way off. Industry is working now with regulators in the UK and at UNECE level to determine what makes a vehicle fully autonomous. This will ensure there is a common understanding and that all autonomous cars meet exacting international standards.”

Do you think fully autonomous cars will become a reality on public roads? Let us know in the comments...