Car security: how to keep your car and driveway protected

From simple to hi-tech, we look at some of the best ways to help prevent you from having your car or its contents stolen 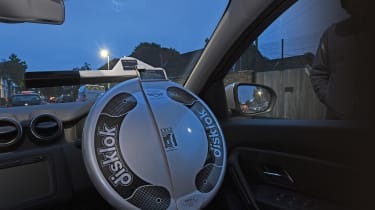 With car crime on the rise, car security is more important than ever before. Theft of and from vehicles is at a five-year high, according to official figures from the Home Office, while insurers said claims for stolen cars in January to March this year were higher than for any quarter since 2012.

Unlike in previous spikes, though, the thieves aren’t joyriders. The modern car crook doesn’t use a crowbar or screwdriver, and isn’t stealing for fun. Instead, they will invest hundreds of pounds in sophisticated tech to bypass modern security systems. Once stolen, the cars will be given a false identity, smuggled abroad or broken up for parts.

• Insurance payouts for car theft at highest level since 2012

How can you make life more difficult for these increasingly-sophisticated criminals? We’ve taken a look at some of the latest gadgets, and a few old favourites, to help keep your car safe and potentially bring down the cost of insurance. 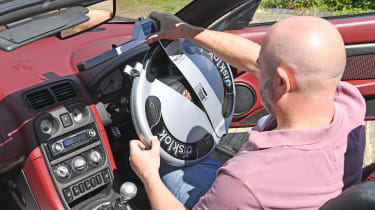 Steering wheel locks have been around for decades, but they are still a good way to make life difficult for thieves. Something which covers the wheel completely, like a Disklok, will deter all but the most committed criminal by making it impossible to drive off. It will also prevent airbag or steering wheel theft, which is an increasing problem as crooks look for cheap parts to repair crash-damaged cars. The downside is that they are cumbersome and relatively expensive, but they can be used on any vehicle, from classics to motorhomes.

While some thieves are using clever technology to break into cars, the cruder criminal will still use the smash-and-grab method to get into a vehicle and take whatever they want. One way to stop or slow them down is to install glass lamination on the side and rear windows. This plastic sheeting is invisible but helps strengthen and hold the panes together, like a laminated windscreen. Professionally-installed film on a mid-sized car, such as a Nissan Qashqai, will be around £500 from www.fxuk.net.

Block to the future

Many modern models are ‘keyless’, which means you don’t have to take the key out of your pocket. While that’s great for convenience, it’s not so good for security. Thieves use boosters to amplify the key’s signal enough to open and start the car. You can prevent it by using a signal-blocking Faraday bag. Our Best Buy last year was the £5 Defender Pouch; similar items are available from online stores and car accessory shops. You might want to keep keys (including spares) in a safe, too, to protect your car in the event of a burglary. They start from less than £40.

All modern cars have an OBD (on-board diagnostic) port, a universal plug technicians use to access the vehicle’s electronic brain. Unfortunately, this port can also be used by crooks to bypass the immobiliser, and even reprogram a blank key so that it unlocks and starts the car. You can protect an OBD port with a special lock, costing less than £200, depending on the model. Or consider a combined OBD protector, tracker and key-clone preventer, like that offered by StopTrack for £599, plus £6.50 a month. 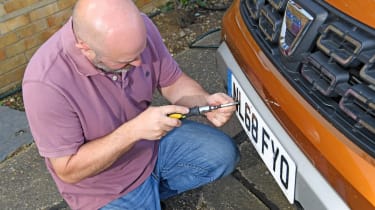 Having your number plates stolen doesn’t just mean you’ll have to pay to replace them. Thieves can use false plates to clone your car (or disguise a stolen model’s identity) and then use the vehicle to commit other crimes. If you’re a victim of number plate theft you could face lots of stressful paperwork as you clear your name. Since most plates are fixed by either sticky pads or screws, any thief can remove them in seconds. Make it more difficult for criminals by using tamper-proof screws on number plates. These are available from as little as £5.99. 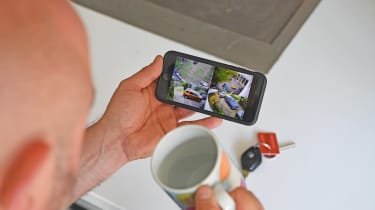 Thieves tend to be camera-shy, so CCTV can be a good deterrent, and help police to identify and catch crooks. Make sure any system has infrared night vision, and go for the best resolution you can afford to make sure faces and registration numbers are identifiable. Basic wired systems with just one camera are available from Amazon for less than £100, and tend to be easy to fit. Sophisticated WiFi set-ups, like the Ring video doorbell, can be expanded to use wireless cameras with floodlights for under £400.

Even if a thief has used a computer to bypass the car’s electronics, they won’t be able to get it off the driveway, or out of a parking space, if it’s blocked in by a solid metal post. Physical barriers such as this vary in their sophistication, with remote-control bollards which rise out of the ground automatically costing around £2,000, while a simple key-operated post is £23 from Halfords. Just remember to keep the key outside the car, and don’t forget the post is there and drive into it yourself. 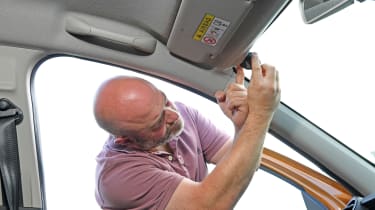 If your car has gone, the chances of it being recovered are low, unless you have a tracker. In fact, some insurance companies will insist on a unit being fitted to certain cars, or will give meaningful discount for a properly-fitted device. Simple GPS trackers can be bought for less than £45, while more sophisticated and professionally-fitted systems, which are approved by insurers and the police, cost between £361 and £708, depending on their features and sophistication, plus an annual subscription fee.

Your car is marked 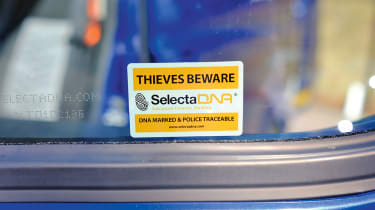 Selling an entire stolen car is complicated and risky, but breaking one up for parts is comparatively easy and hugely profitable for thieves. Simple window etching acts as a deterrent, while DNA Marking is even more sophisticated. This involves dabbing a uniquely-coded paint on 50 points on your car. It dries clear, but can be seen under ultra-violet lights. Security-marking kits, such as SelectaDNA, cost around £60, but some police forces offer it for free, and some insurers will give a discount for marked cars.

Check out our tips and advice section for our latest guides on how to help keep your car safe...