The Techrules Ren RS has been unveiled and promises up to six electric motors, two diesel turbines and 7,722Nm of torque... 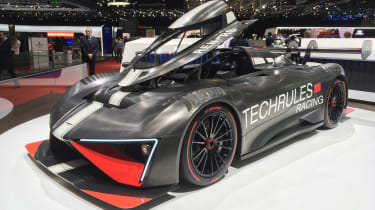 China-based start-up Techrules has unveiled a track-going diesel hybrid hypercar called the Ren RS at the 2018 Geneva Motor Show. The RS is a derivative of the standard Ren, which was revealed at the 2017 Geneva show and is not your normal high performance track toy.

For starters, the RS can be specified with not one, not two, but six electric motors, two turbines (which act as range extenders) and a 28.4kWh battery pack. All this gives the RS claimed performance figures of 0-62mph in 3.0 seconds, 1,287bhp and a humongous 7,722Nm of torque.

It should be noted, that as the RS has been designed with track users in mind, the performance is configurable to the needs of the driver. So those looking for a little less power can opt for a Ren RS with only a single turbine or four electric motors, reducing the power output to a lowly 858bhp and a measly 1,560Nm of torque. 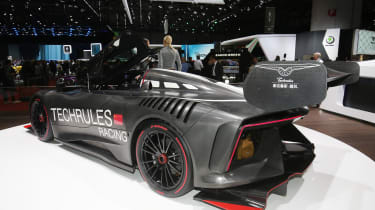 Perhaps the most unusual feature of Techrules’ car, irrespective of configuration, is the presence of a diesel turbine range extender. The system works in much the same way as a regular turbine, but in this application works to recharge the Ren RS’ depleted battery packs.

This provides the Ren RS with a theoretical range of approximately 727 miles from an 80-litre tank of diesel. While this figure is based on the soon to be replaced NEDC testing procedure, it equates to a mpg of around 40 – which, if found possible in the real world, would be impressive considering the car is claimed to be capable of reaching 205mph.

Techrules has opted for a carbon-fibre monocoque chassis, much like the best supercars on sale today, with the cockpit featuring just the one seat. For the safety of the driver, the cockpit cell it is fitted with a dramatic sounding Canopy Ejection system, which activates in the event of a crash and automatically opens the roof for a swift escape. The use of exotic materials doesn’t stop with the chassis either, as the high-performance hybrid comes with carbon ceramic brakes as standard.

There has been no mention of pricing, but if and when the Ren RS ever gets built, it will be a low-volume, high-performance hybrid designed for track use only, so expect a lot of zeros.

Think the Techrules Ren RS is impressive, then why not take a look at the fastest road cars in the world?