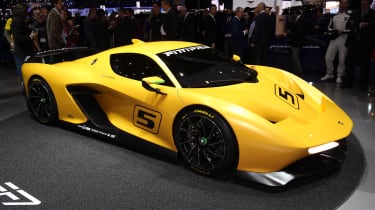 It will be built with support from German engineering firm HWA – an AMG spin-off working primarily in motorsport. Given the complex alliances behind the EF7 Vision Gran Turismo by Pininfarina, the lengthy title is almost understandable. 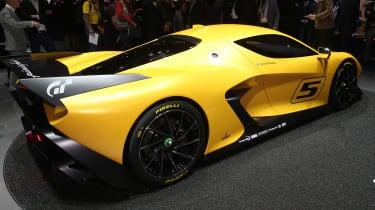 The body and monocoque of the EF7 will be made entirely from carbon fibre, resulting in a curb weight of around 1,000kg. We also know what will be powering the EF7 – a naturally aspirated V8 with over 592bhp.

According to Pininfarina, Fittipaldi has applied “all his track knowledge on creating a new experience that will elevate the driving ability of super car enthusiasts from all over the world”. Fittipaldi himself says that the EF7 will be "forgiving and safe for drivers of all skill levels" and that "owner-drivers can expect reliability, lower maintenance cost and minimal mechanic and tech teams - which means more time an elation on track." 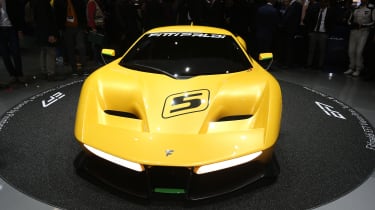 The full car is on display on Pininfarina’s Geneva stand. At the back we see a large carbon fibre wing and predominantly black and carbon rear fascia similar to the Aston Martin Vulcan, while at the front the car gets a radical looking nose with a large front splitter and wing setup, plus LED strip headlights.

As the name suggests, the car will appear digitally in the Gran Turismo racing game series as the next Vision GT concept car.

Which supercar did you like best at this year's Geneva Motor Show? Let us know in the comments.