Its predecessor was one of the UK's top-selling city cars. So is Kia’s new Picanto just as tempting? We find out as it meets Peugeot's 107 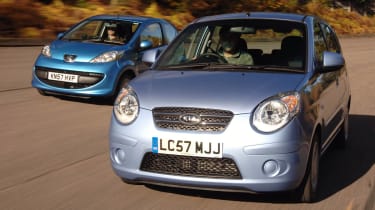 Rewind 10 years and the thought of owning a Kia was a very different prospect from today. Then, the Korean firm had a reputation for dull, low-rent cars with residual values as solid as the products’ flimsy build quality.

What a difference a decade has made. It’s unlikely the brand itself could have predicted its success, especially in the image-conscious UK market. But now, thanks to the likes of the Cee’d, Carens and Picanto, it can rub shoulders with what were once more illustrious rivals. This transformation was led by the Picanto. Launched in 2004, it has consistently been one of Britain’s top-selling small cars – helping change the way buyers think about the manufacturer.

More than 38,000 have been sold here, attracting customers with good value, five doors as standard, tidy dynamics and a practical cabin. It’s a great city car. And, nearly four years on, Kia is giving the Picanto a facelift. There’s a fresh nose, redesigned interior, revised engines and a new six-strong model line-up. Yet the bargain prices remain, with the range starting at only £5,995.

Competition in this market is fierce, and here we pit the Kia against another fine city car: the stylish Peugeot 107. It’s more expensive than its Korean rival, but the French challenger is also aimed at young motorists. Which will come out on top?

The previous Kia Picanto was a good city car, and although the modifications are not extensive, they have built on that reputation. The cabin is much improved, with a more upmarket, higher-quality feel, while the styling changes add charm. But the car could still do with being more distinctive.

It offers decent passenger and boot space, and access is easy, as five doors are standard. Light controls and small dimensions make it ideal for town driving. Yet the ride is crashy over potholes and, on bumpy roads, there’s kickback through the steering.

So the Kia loses out narrowly to the Peugeot. Although there’s very little in it, the 107 feels more rounded and better engineered, with superior refinement and ride comfort. Its peppy engine and responsive steering are well suited to urban duties, while body control is a strength, too.

The rear is a little cramped and the boot is a weak point. It’s pricier than the Kia as well. But both models prove buyers no longer have to make compromises with budget city cars. In particular, the 107 shows you can get a fun to drive, stylish and well packaged hatch for a bargain price.