Has Alfa sprinkled some stardust on the family car class with its new Giulietta? We see how it fares against the Golf and the Astra 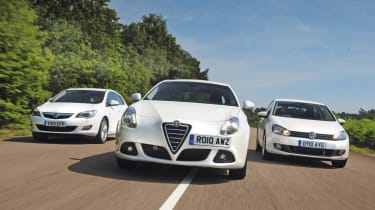 Has Alfa sprinkled some stardust on the family car class with its new Giulietta? We see how it fares against the Golf and the Astra.

Alfa Romeo has looked to the past to inspire its future. The firm’s long-awaited new family car revives a name that dates back to 1954. Back then, the Giulietta courted controversy as the most affordable and practical car the sporty brand had ever produced.

So will its namesake make a similarly bold impression in 2010? The new Giulietta has an unenviable task, but it comes with a strong range of turbocharged engines, fuel-saving stop-start technology and competitive prices.

The biggest-selling petrol model is expected to be the 1.4-litre MultiAir tested here. The 170bhp engine aims to deliver the power of a normally aspirated 2.0-litre with the emissions and economy of a much smaller unit.

It’s not the only car in the sector to use a turbo to good effect. Volkswagen’s TSI engines are in hot demand across the VW Group empire, and the Golf 1.4 TSI GT is an intimidating rival, as it also gets a supercharger to produce its 158bhp.

Both are put in the shade by the Vauxhall Astra 1.6 Turbo SRi. It boasts 178bhp, but pure power won’t win the day here; we’re looking for the best family hatch with a sporty flavour.

Alfa’s past is littered with cars that failed to deliver on their considerable promise when they hit dealers. So is the new Giulietta a model you have to buy with your heart rather than your head? No.

It has a brilliant engine and stop-start technology, while the price is competitive and standard kit generous – so the Alfa makes real sense, especially for business users. It’s also a distinctive-looking addition to the family car class.

But it still can’t topple the brilliant Golf – because the more sensible approach adopted by Alfa has seen some of the driving fun evaporate from the mix.

While the VW is famed for its classy cabin and premium image, it’s also great to drive, with bags of grip, a fine engine and market-leading refinement and comfort. In contrast, the Alfa lacks front end bite, while the DNA software robs drivers of the best overall set-up.

Still, it beats the Vauxhall. The SRi is composed and capable, yet isn’t involving to drive. Plus, it’s the most expensive and polluting car here. This is arguably the best version of the new Astra we’ve tested, but it finishes a close third.