We see if bold new Saab SUV is a worthy addition to brand’s new line-up, and can it save the struggling Swedish brand? 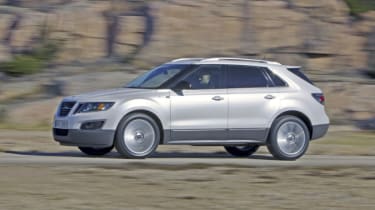 Smartly styled, generously equipped and very capable, the 9-4X is an impressive luxury SUV, and deserves to find a following in the UK. Its silky twin-turbocharged V6 sounds great and provides a real turn of speed, too. However, it’s costly to run, and as there’s no diesel engine option, the 9-4X isn’t likely to be a big seller here. Still, buyers who are prepared to cope with the heavy bills at the pumps will get a spacious, fully loaded alternative to other, more predictable 4x4s.

Is this the Saab that finally boasts the X factor? Although the company is still only just securing its future, it’s pressing ahead with new models – and expanding its line-up with this, the 9-4X.

A legacy of its relationship with General Motors, the SUV is loosely based on the US-only Cadillac SRX. It will be priced from £40,000 when order books open here in September, with first deliveries not expected until December. But Auto Express got a preview of what UK buyers can expect with a drive in a pre-production version.

The first thing that strikes you about the 9-4X is its size – it’s as big as a BMW X5, and equally imposing. Despite its Cadillac underpinnings, though, designers have still managed to make sure the new SUV looks every inch a Saab. It gets the firm’s famous wraparound-effect windscreen, ice-block lighting front and rear, and a bold front grille.

Together with a gently sloping roofline and contrasting sills, it’s a smartly styled SUV that should appeal to Saab fans and new customers alike. Inside, there’s plenty of room for five, while the boot is large, with added capacity available by folding the seats down.

Up front, the dash will be familiar to Saab drivers, with green-on-black dials, a wraparound dash and a starter button located between the front seats. The kit list is extensive. Despite its X5 dimensions, Saab is pitching the 9-4X against the smaller Audi Q5, and climate control, leather seats, sat-nav, a Bose stereo and 20-inch alloys are all standard.

There’s also a new lighting system called Town Light, which gives a broader beam at speeds below 30mph so pedestrians can be seen more easily. Above 60mph, Motorway Light mode takes over, extending the beam depth to improve visibility. Only one engine will be available – a 296bhp 2.8-litre twin-turbo V6, which is mated to a six-speed auto box.

Currently, there are no plans for a diesel. On the move, it’s smooth and punchy, and the 0-62mph sprint takes around eight seconds. However, it returns only around 22mpg, so is likely to be costly to run. Under the skin, engineers have modified the Cadillac underpinnings, creating a new platform called Theta Premium, which mixes components from GM’s Theta and Epsilon 2 set-ups.

Saab’s XWD all-wheel-drive system and DriveSense adaptive chassis control have also been added. It all makes for a machine that grips strongly in bends. Although biased towards on-road use, the 9-4X should be happy in mild off-road terrain. The steering is a little vague, and the large wheels take the edge off ride comfort, but body control is good. All in all, it’s a decent addition to the range.

Rival: Audi Q5 THE Q5 is so popular that Audi can’t build them fast enough. It drives well, looks the part and comes with a wide engine range, including two powerful diesels. But it’s not as spacious or well equipped as the 9-4X.