Does the sporty new MINI Coupe have the "go" to match its "show"? We get behind the wheel to find out 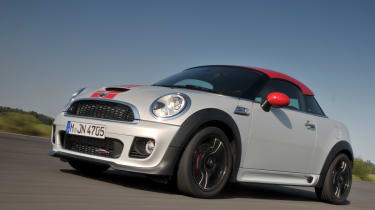 The shy and retiring need not apply! The MINI John Cooper Works Coupe is every bit as dramatic to drive as it is to look at. The powerful model has the makings of a machine that will take the brand to a group of drivers who feel that the standard hatch just isn’t tough enough.

It’s hard to believe a decade has passed since the brilliant BMW MINI first hit the road… But what better way to mark the anniversary than with the launch of its sportiest, most eagerly anticipated model yet.

The new MINI Coupe, first shown as a concept back in 2008 has finally arrived – but does the two-seater live up to the promise of its daring styling? To find out, we tested the fastest version available, the 211bhp 1.6-litre John Cooper Works Coupe.

There’s no doubt that the newcomer turns heads. Though its round headlamps and bonnet-mounted airscoop have been lifted almost without change from the hatchback, there are significant changes to this car’s layout, and proportions.

For starters, this hatch is a strict two-seater. What’s more, the windscreen is more steeply raked than any other MINIs and the car’s roofline is much lower. On the rear deck, you’ll spot a couple of purposeful looking wings, one of which pops up automatically once the car is travelling at over 40mph. At speed, this will add up to 40kg of downforce to the rear axle, improving stability and handling.

However, there’s no escaping the fact that once you are stood next to the car it looks unexpectedly small, particularly as it follows in the wheel tracks of the launch of the big MINI Countryman. But it would be wrong to judge this, the smallest and youngest member of the five-strong MINI family as the “junior” of the brood.

To underline this car's sporting credentials, the £23,750 JCW gets a dramatic two tone paint job and large 17-inch alloy wheels. Under the skin, there’s stiff sports suspension and a bespoke chassis that’s far more driver focussed than the one that’s offered on the standard hatchback.

Aimed at small coupes like the Peugeot RCZ this car is the closest thing yet to the limited-edition MINI John Cooper Works GP, launched to mark the end of production of the Mk1 MINI in 2005.

Push the lozenge like ignition “key” into the dash and press the MINI’s starter button and the Coupe’s four cylinder 1.6-litre turbocharged engine bursts into life. At idle, it’s comparatively hushed, but if you select first and push the throttle to the floor it quickly grows louder. The steering feels heavier than we were expecting from such a small car, but the electric system is accurate.

On bumpy roads, there’s no doubt that the driver is kept busy. The sports suspension and short wheelbase mean you have to make constant corrections to the steering to keep the car heading in the intended direction. And if you use the powerful disc brakes hard, you’ll need to be on the case, guiding the car as it bobs and weaves under the extra load.

On the German Autobahn, our car easily reached an impressive 150mph, while official figures claim the car will accelerate from 0-62mph in only 6.4 seconds.

With all that in mind this is not a car that we would describe as relaxing to drive – yet it is undeniably exciting, and involving too. If you have been lucky enough to drive the hatchback version of the MINI John Cooper Works, imagine it as being a bit like that car… only turned up to eleven.

While that might prove too much for some, we're sure those who developed original Mini Coupes like the legendary Mini Marcos or Broadspeed GT would approve… Then, as now, the MINI Coupe really does appear to be in a class of its own.