The LS460 is highly impressive and has incredible engineering, but does it it lack personality? 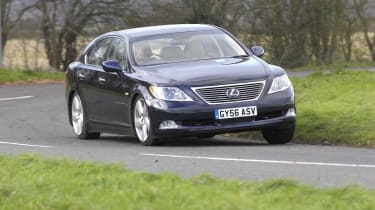 Having recently been named Japanese Car of the Year, the new LS comes into this test with strong credentials. But does the Lexus badge yet have the kudos necessary to rival the best Euro­pean brands on home ground? We’re not so sure.

Then there’s the styling. Mercedes’ latest S-Class caused controversy when it was launched at the start of this year, and it was a similar story with the BMW 7-Series before it. But the LS didn’t turn one head during the course of a week’s testing with us. It’s instantly recognisable as a Lexus, yet isn’t even as challenging as the other models in the brand’s range – the GS has greater aggression and the IS looks more daring.

The designers have attempted to give it some individuality with chrome exhausts and rear light clusters which wrap around the wing. Yet overall, this is a very conservative new car that is certain to sell well in the Japanese and US markets, but doesn’t stand out enough for British buyers.

Similar criticism can be levelled at the interior. While there’s no doubt about the stunning fit and finish or the quality of the materials, the cabin simply doesn’t provide the same sense of occasion as the S-Class. It’s pleasant inside, but far from memorable. Comfort is where the LS excels, however. Rear passengers are particularly well catered for, with electrically adjustable, heated seats. Fold down the centre armrest and you’ll reveal a control panel for the climate and stereo systems in the back, plus the housing for the DVD remote. This standard feature has a crystal-sharp screen and is one of the best in-car set-ups we have used.

As it’s filled with so much technology, it’s no surprise that the centre console is a little button-heavy. We would like to have seen a more sleek design, and one which distinguishes the LS from the rest of the Lexus range. The central touch-screen is easy to use and it doesn’t take long to familiarise yourself with all the controls, but the set-up lacks the Mercedes system’s imagination and attention to detail. As a car to be chauffeured in, though, the Lexus is excellent – it’s utterly quiet and silky smooth, leaving passengers to relax and enjoy the soft seats and space.

While it deals with undulations beautifully, the LS’s air-suspension struggles to contain sharp bumps. And although handling isn’t as important as comfort or refinement to buyers in this class, the driving experience isn’t especially tempting. With no steering feedback and plenty of wallow in corners, the Lexus lacks its rival’s sharpness. Still, the 4.6-litre powerplant is superbly engineered. It’s nearly as potent as the S500’s 5.4-litre motor, and there’s no trace of vibration. Our test car had covered fewer than 1,000 miles, though, so at 6.5 seconds the Lexus was well short of the maker’s claimed 5.7-second 0-60mph time.

With less torque that peaks higher up than its rival’s, plus a 115kg weight penalty, the LS simply doesn’t have the S500’s turn of pace. And while its shifts are seamless, the eight-speed transmission appears little more than a gimmick.

There are enough gadgets to satisfy even the most hardcore technophiles, such as Lane Keep Assist, the Driver Monitoring System, Intelli­gent Park Assist and an Advanced Obstacle Detec­tion System. Indeed, the Lexus has far more stan­dard kit than the Mercedes. But equipment alone is not enough to decide the outcome of this test.

Neither saloon is ideal if you are concerned about fuel figures. The Lexus returned 17.6mpg – some way short of the 25.4mpg claimed figure. Motorway stints saw that rise to 21mpg, though.

Luxury cruisers are not renowned for keeping their value, but the Lexus is forecast to do better than the Mercedes. However, with a retained value of 35.6 per cent, it still sheds £45,724 in three years.

There are 119 fewer Lexus dealers than Mercedes sites, yet the Japanese firm is known for its great customer care – it regularly tops our Driver Power satisfaction survey. The service intervals are short, though.

With its big engine, the Lexus sits in the 35 per cent tax bracket. It’s an expensive fleet car, but the cheaper of the two models here. Due to the LS’s lower list price, higher-rate owners will shell out £9,940 a year.