The S-Class oozes quality, but how will it perform against Japan's finest? 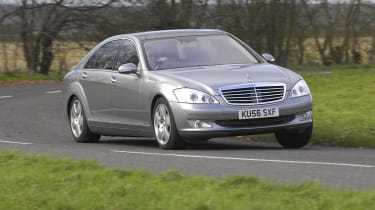 Although the latest S-Class is nearly a year old, the debate over its styling still rages. The high waistline and flared wheelarches make it one of Merc­edes’ most daring designs in recent times.

Park it alongside the Lexus, and the S500L looks even more ostentatious. When driving in convoy, it was the S500 that attracted attention – in comparison, the Lexus already seemed passé. With its imposing grille and angular headlights, the German machine has a surprisingly aggressive stance, although the design does a good job of concealing the fact that it’s 5.2 metres long.

Inside, it’s even more apparent that this Merc is something special. Unlike the LS, the S-Class stands out from the rest of the model range. Build quality is impeccable, as are the materials used throughout. But it’s the classic style and attention to detail which combine to give this car a special feel that the Lexus simply cannot match.

The armchair-like rear seats are as comfortable as its rival’s here. If anything, they are even more cosseting, not least because this LWB model offers more legroom. But in terms of standard kit, occupants in the Mercedes will feel relatively hard done by. Side window blinds are a £520 option, while the DVD player will set buyers back a whopping £3,200. Similarly, soft-close doors and a powered bootlid are both on the extras list, yet they come as standard on the Lexus.

The S-Class’s modern dashboard design is a big plus here, though. Its curved layout works well, and the switchgear feels more expensive than that of the LS. What’s more, the control system is far better thought-out than its rival’s – the central computer-style screen and metal dial are simple to master, while steering wheel pads operate most key functions, so you needn’t take your eyes off the road.

It’s also immediately apparent that Mercedes has invested heavily under the skin. Dynamically, the S500L is highly accomplished; unlike the Lexus, there’s no marked difference in the way the suspension absorbs crests or potholes, as both pass under the wheels practically unnoticed.

The ride is virtually faultless, while road and tyre noise are as distant here as in the Japanese contender. Furthermore, the S-Class’s agility belies its size and weight. Of the two models, it’s the much more rewarding to drive, thanks to sharp cornering, meaty steering and strong brakes.

Passengers will appreciate the good body control, while the slightly stiffer suspension – as in the Lexus, it’s switchable between comfort and sport modes – prevents the S-Class from pitching and diving as much as the LS. The 5.4-litre engine is superb, and acceleration is amazing considering the model’s size and weight. There is none of the noise usually associated with high speeds, while the seven-ratio gearbox delivers slick shifts. Due to its power and weight advantage, the Merc out­paces the Lexus. It’s quicker in kickdown, too, and feels more urgent and responsive than its rival.

Although price differences aren’t particularly decisive in this market, it’s disappointing to see the Mercedes doesn’t provide anywhere near the same amount of standard equipment as the LS. Features such as voice recognition, a reversing camera, cooled seats and active radar cruise control are all optional extras on the S-Class, yet come as standard on the LS. Will this penny-pinching attitude count against the German model?

On our test route, the S500L was a bit more frugal, giving 18.6mpg. The huge 90-litre tank means a range of 368 miles – 43 more than the Lexus – but fill-ups are eye-wateringly expensive events.

The S-Class loses money faster than any other Mercedes, and the S500L has some of the poorest residuals in the model line-up. After three years, it is worth 32 per cent of its new value – a drop of £50,396.

The S500 is marginally cheaper to maintain, and has a variable service schedule. But Merc dealers finished 23rd out of 33 in Driver Power 2006; you expect better when spending so much.