Great to look at and even better inside, the Civic is a strong package 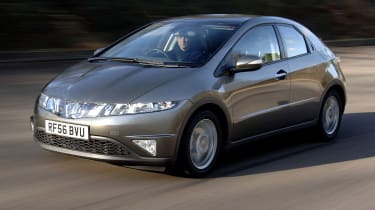 Talk about a revolution. The previous Civic had a reputation for appealing only to more ‘mature’ buyers, but the current model is a different matter altogether. In one fell swoop, Honda has built a car that makes every other hatchback look dull.

The styling may not appeal to everyone, but thanks to its wedge shape and muscular stance, the Civic stands out from the crowd. There’s a futuristic feel created by the space-age band of lights and reflectors merging across the nose and split tailgate, while other details such as the triangular foglights and exhausts, plus concealed rear door handles, also catch the eye.

Shunning current trends for middle-age spread, the Civic is shorter and lower than its predecessor – but that doesn’t mean it’s not prac­tical. The 485-litre boot is the largest here by a long way, and also features a neat false floor that lifts to reveal a hidden compartment (there’s no spare wheel) or stows at the bottom of the cubby to boost the load volume still further. And with a fuel tank which, as on the firm’s Jazz, has been moved forward under the front seats, the engineers were free to create a highly versatile area.

But the rear chairs aren’t only clever; they’re also spacious. When climbing in, you notice how small the back doors are and the fact the thick C-pillars darken the cabin, but you can’t argue with 70mm more legroom than in the Auris. The Honda caters for passengers better than any car in the class.

Up front, the cockpit oozes style and quality – Honda’s designers clearly wanted to ensure that the interior is as bold as the exterior. You would expect the unconventional layout to be confusing, but once you’re familiar with it, it’s one of the most user-friendly we’ve ever tried. The controls are cleverly clustered, the materials are a step up from those in the Auris and it simply feels much more special and sophisticated than its rivals.

We do have a few criticisms, though. The steering wheel can partially obscure the digital speedometer, and the lip spoiler across the tailgate seriously hampers rearward visibility.

The powerplant doesn’t let the side down, however. At the test track, the Civic outpaced all its competitors with ease. Admittedly, the engine’s 1.8-litre capacity gives the Honda a healthy advantage, but you might also be surprised to learn the i-VTEC is the cleanest and most economical unit here.

A 30-70mph time of 8.2 seconds puts the Civic two seconds clear of the Focus and Golf, while the snappy throttle action, enthusiastic mid-range pull, hard-edged engine note and slick six-speed gearbox make it feel like a hot hatch.

The precise pedals and steering are light enough to be easy to use around town, but also prove impressively responsive. That bodes well for the car’s driver appeal, and on the whole the Honda lives up to expectations. It’s grippy and well balanced, although it doesn’t tackle corners with the same panache as the Focus.

Ride comfort is entirely acceptable, but all three rivals excel in that area, and the Civic comes across as rather sporting in comparison, with the dampers failing to fully isolate rough road surfaces. At least top-drawer refinement and sound insulation make it a fine motorway machine.

You pay for the privilege, though. In ES spec, the Civic is very well equipped, but it costs nearly £2,000 more than the Auris in this test – although Honda’s lesser S version comes in at £13,890.

Bigger, faster, more powerful – and frugal? It sounds too good to be true, but the Civic 1.8 returned 36.0mpg. Drive gently and a tank should last more than 400 miles.

The Civic was a big step forward in terms of style, and it’s doing very well used. It can’t quite match the Golf, but with a resale value of 47.5 per cent, it’s not far behind.

The potent Civic is the cheapest business option. Its clean engine emits 152g/km of CO2, putting it in the 17 per cent category; lower-band drivers face a £596 tax bill.