Have the latest updates sent the British baby to the top of the class? 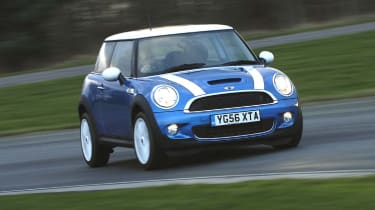 Is the MINI a victim of its own success? Ask most drivers to choose the most hardcore hot hatch in this line-up, and the Cooper S would be the last car they would point at. Cute retro bodywork, a trendy urban image and perky all-round appeal mean it has become a massive worldwide sales smash, so people tend to overlook the fact that it’s also one of the most gifted drivers’ cars in its class.

Telling old from new is tricky, however. While every body panel has changed, the noticeably higher bonnet is the only major alteration. If you want your MINI to look sporting, though, you must specify the £1,875 Chili pack. Normally, we urge buyers to steer clear of bigger wheels, as the ride deteriorates and the extra grip can upset the hatch’s balance.

But the 17-inch alloys, lowered suspension and bi-xenon headlamps add such a sense of purpose, we think they’re essential.

As with all MINIs, the vast range of options and colours means your car can fit any profile – from sophisticated city slicker to laid-back luxury hatch. The cabin is equally individual, not least because it’s so small. Although the rear chairs have Isofix mountings, even child seats will struggle to fit, and you can forget slotting a buggy in the boot.

From a driver’s perspective, it’s much more of a success. The MINI has such a unique ambience: the upright windscreen and A-pillars are a long way forward, you sit surprisingly low and we love the whole design strategy – the toggle switches, giant speedometer and round key are great.

But this individuality can’t disguise the faults. Our test model had more than £4,000 of options fitted, yet was still sparsely equipped inside, the air-con controls are cheap and nasty and the CD player sticks out obtrusively. The centre console isn’t particularly attractive.

The little 1.6-litre engine looks pretty plain, too. But aside from the fact the 175bhp unit appears weak on paper and doesn’t sound as intoxicating as the Type R’s motor, it’s arguably the most impressive performer here. The turbocharger spools up almost instantly, and with 260Nm of torque to shift only 1,205kg, we weren’t at all surprised that, at the track, the MINI proved every bit as fast as the Civic flat-out, and knocked it for six in our in-gear tests.

With pulling power peaking at only 1,700rpm, the Cooper S is never caught out on the road – not even the Focus responds as quickly and eagerly when an overtaking opportunity presents itself. What’s more, none of its rivals can touch the British baby around town. Compact, nippy, responsive, easy to see out of and with a tight turning circle, it ran rings round the opposition.

This ability to engage the driver in all situations is the MINI’s key strength. The Cooper S wears its heart on its sleeve, so even though its chassis isn’t as pure and sharp as the Civic’s, the car is just as much fun over fast cross-country roads. It does have a habit of spinning an inside wheel through slow corners, but you can specify an optional limited slip differential.

That’s likely to make the Oxford-built hot hatch even busier on the road, and further reduce its comfort and refinement. Yet while the small supermini frame does hamper its cruising ability at speed, noise levels are only marginally higher and the ride is undoubtedly better damped than on the previous machine.

If economy is a priority, buy the MINI. Light, clean and torquey, the Cooper S has no trouble returning well over 30mpg, and rarely dipped under 25mpg even when driven hard.

Thanks to its desirable image and features like the tlc servicing package, the MINI is one of the most sought after used cars around. A 49.1 per cent residual is the best on test.

Pick the MINI for a truly affordable company hot hatch. With the cleanest engine (164g/km) and lowest price, its tax bills are about half as much as any rival’s.

You'd be forgiven for expecting the group 15 MINI to be cheap to insure. But premiums are only £29 less than the Renault’s. The new clamshell nose hasn’t cut repair costs much.