TeamRS, Ford’s UK racing arm, must be satisfied with its offering 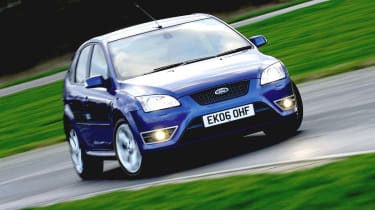 The MINI may have captured our hearts when we tested it back in Issue 935, but our verdict was conclusive – if you wanted more practicality and maturity, the Focus ST couldn’t be beaten. Nothing has changed since last November.

TeamRS, Ford’s UK-based racing and performance arm, can be proud of its achievements. And considering how plain the standard car is, the outfit is also to be congratulated for making the hot version look suitably purposeful – even the five-door tested here. Intended to echo the Focus WRC car, it has added visual weight low-down to give a ground-hugging stance.

The extra doors undoubtedly make it a practical choice, too. The large front seats don’t intrude on rear legroom too much and the rear bench is well shaped. Even better are the chunky front chairs – the big Recaros lock you tightly in place. If only they could be adjusted lower.

We wish Ford’s stylists had worked a bit harder on the interior, though. There’s no denying it’s well built and ergonomically excellent, but you don’t get the impression you are driving something special. This is where the Type R and Cooper S score, providing plenty of excitement as soon as you get in. Aside from the aftermarket dash-top gauges and ST badging, the Focus is pretty tame.

This means the ST could easily end up feeling anonymous during everyday driving. But it doesn’t – and that’s down to the controls and the engine. The positive pedals, slick steering and meaty six-speed gearbox are free from slack, and respond crisply and precisely to inputs. Meanwhile, the 2.5-litre powerplant is sure to raise a smile every time. The Volvo-sourced five-cylinder has been tuned to provide a suitable soundtrack – and the result is a wonderful warble from the word go.

The turbocharged motor has a lazier engine note than the Civic – and that’s reflected in the way the power is delivered. Rather than the frenetic Type R’s peaky characteristics, the ST pulls like a train from tickover. Maximum torque (at 320Nm, the highest here) arrives at a mere 1,600rpm, so although the Ford weighs in at 1,437kg, it’s even faster in-gear than the MINI.

However, we used our long-term test car, and it proved a bit off-colour in the maximum acceleration tests. Previous STs have matched or bettered the Mégane R230’s times. But instead of being the fastest of our quartet, the Focus was the slowest on the day, taking 7.0 seconds to cover the sprint from 0-60mph. It’s due a service soon.

The car’s handling talents are undiminished, though. Ford didn’t take a half-hearted approach with the ST: compared to the standard Focus, it has an extra front cross brace, has been dropped 25mm and fitted with 30 per cent stiffer springs, plus the rear anti-roll bar is 5mm thicker.

Yet while these upgrades are comprehensive, they have done nothing to ruin the level of comfort the Ford offers. Better controlled than the Mégane and more soothing than the Civic, it flows over bumpy ground effortlessly.

At the same time, the Focus manages to provide detailed feedback through the steering wheel and chassis, so you know exactly what’s going on. It’s not as immediate and involving as the Type R – in fact, it feels woolly in comparison – but it’s never less than engaging.

The five-door ST-2 is our favourite model in the hot Focus range for its blend of equipment and versatility. And prices start at only £17,995.

Price: £19,595Model tested: Ford Focus ST-2Chart position: 3WHY: Our favourite full-size hot hatch. Every model in the six-strong range is a driver’s delight.

You shouldn’t be surprised that the Focus performs so well second-hand. The Ford has limited availability, which keeps used values buoyant at 47.2 per cent.

As it has the worst CO2 emissions – at 224g/km – and the highest price, it was no surprise the ST is the most costly company choice. Lower-rate drivers pay £1,336 a year.

We were quoted £566 to cover the Focus. Although it’s cheap to fix due to its mass-market approach, our analysts say the ST’s boy-racer image makes it a larger theft risk.