Does Honda’s latest hot hatch have the thrills to match its wild looks? 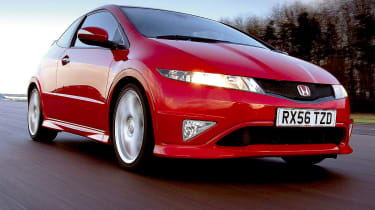 Rawfined. It’s Honda’s latest buzzword, and apparently summarises the new Type R. OK, so it’s mostly marketing claptrap, but break it down and it does make some sense. The flagship needs to retain the uncompromising character which made its predecessor such a hit, but with added comfort and refinement. That’s a tall order – although if any manufact­urer can pull it off, it’s Honda.

Mind you, the styling doesn’t suggest bosses were on a quest to find the middle ground. Sharp sills and striking spoilers beef up the visuals, blending perfectly with the three-door hatch’s dramatic lines. In fact, so well integrated are the alterations that it’s almost as though the eighth-generation Civic was designed as a Type R, and then toned down for the ordinary versions.

It’s a world away from its predecessor, which looked like a racing bread van. What’s even cleverer is that this version, with its cab-forward stance and compact dimensions, has the larger interior. Whether you’re lugging people or possessions, none of its rivals here compares.

And only the MINI comes close to matching the Civic’s sense of occasion in the front. Much of the clear and simple layout is carried over from the standard hatch, but the wraparound dashboard, metal pedals and gearknob, red stitching and central rev counter mean the Type R isn’t only interesting inside, but focused and sporting, too.

We do have criticisms, though. The doors are tinny, the dark red trim is questionable, the other­wise superb seats can prove numbing within a couple of hours and the stereo could sound richer.

But who cares when you’ve got this engine to listen to? The sound is pure touring car howl – hard-edged and intoxicating. As before, there’s the familiar VTEC step in the power delivery, but Honda’s engineers have worked hard to make the highly tuned 2.0-litre four-cylinder more usable.

This means the Type R is far more tractable than before, so there’s no need for frantic gearshifts. But while the 2.0-litre’s characteristics have changed markedly, the power outputs haven’t, and we can’t help being slightly disappointed that the Honda has ‘only’ 198bhp.

The lightweight hatch uses it well, though, trading acceleration times with the MINI. But more importantly, the Civic feels fast due to the stunning throttle response, snappy shift and short gearing. These factors should also make it a tiring car to drive, but although it pulls 3,400rpm at 70mph, the smooth engine doesn’t drone when cruising. Admittedly, the unyielding ride means you can never forget what type of car you’re in, but while the tuned suspension is very firm, it’s brilliant at taking the edge off sharp bumps. There are no sudden jolts and the super-stiff frame not only ensures taut handling, but helps keep noise at bay. The Honda’s 72dB meter reading at 70mph was the same as in both the Mégane and Focus.

And then there’s the handling – it’s sublime. The steering is perfectly weighted and, although it’s not the last word in feedback, the chassis is incredibly communicative. The honed controls all work in harmony, and no rival holds a line in corners as tenaciously or has such fabulous traction. So, no matter what your journey, the Civic is addictive.

Price: £18,600Model tested: Honda Civic Type R GTChart position: 1WHY: Its hard-edged predecessor had a cult following; the new car needs to be easier to live with.

The high-revving, low-geared i-VTEC doesn’t aid fuel economy, but our 25.8mpg overall figure was better than we expected. It also topped 32mpg on two motorway tankfuls.

Demand is likely to outstrip supply initially, and while the Type R is not officially on sale until March, early indications suggest a superb retained value of around 50 per cent.

The Type R’s fresh 2.0-litre engine is a belter, yet only the five-cylinder ST has a dirtier output than its 215g/km figure. Mind you, an annual tax liability of £1,228 isn’t too excessive.

Insurance costs may have killed off the last hot hatch boom, but now premiums are more manageable. The Type R sits in group 17, and its £565 quote is close to its rivals’.