Can new turbo engine keep hatch at top of class? 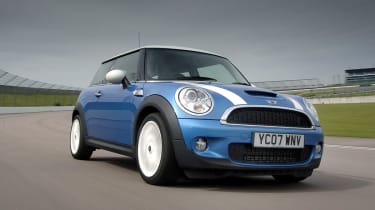 The MINI needs no introduction. Its unique shape is instantly recognisable, and the second-generation model has changed little from its retro-inspired predecessor. It’s a shame, then, that the Cooper S does little to look more sporting than lesser variants.

Aside from the badging, twin centre-exit exhaust and fake bonnet air intake, there’s nothing to mark the range-topping machine out. It’s the same story with the cabin, which is wonderfully designed and makes a real statement, but again is little different to the standard car’s.

However, push the engine start button, and you’ll soon realise this is every inch a hot hatch. The 175bhp unit doesn’t need to be worked as hard as the 207’s, due mainly to the positive and nicely weighted gearchange. The power delivery is smooth and predictable, although it does lack the top-end grunt of the VXR or Clio.

But the MINI is superbly tractable low in the rev range and feels glued to the road, even under hard acceleration. Communicative steering makes for a rewarding drive, and the Cooper S turns in precisely, and rarely becomes unsettled. On smooth roads it is superb – although it’s not perfect.

The ride is far from absorbent, and the large 17-inch wheels with run-flat tyres don’t help. This makes the MINI less relaxing than its rivals over bumpy surfaces, and it’s more likely to be thrown off course. On country roads it doesn’t always flow from bend to bend as smoothly as the VXR or 207.

Then there’s the price. The Cooper S is the most expensive car here, at £16,010. But air-con is an option, and so is stability control, which we think is a big oversight. It’s clear that if you want a well specified MINI, you will have to dig deep.

Price: £16,010Model tested: MINI Cooper SChart position: 1WHY: The retro-styled MINI isn’t all about its looks, as the Cooper S is also engaging and fun to drive.

The Cooper S was the most frugal sporting car in our Economy Special last week (Issue 964), and 33.5mpg here is impressive. We even managed to top 40mpg on the motorway.

Thanks to its strong brand image and BMW engineering, used MINIs are hugely sought after. After three years, the Cooper S is still worth £9,126 – or 57.0 per cent.

Few firms can match Mini’s tlc package. Buyers pay £150 for five years or 50,000 miles of servicing. It covers all parts and labour, and is transferable if you sell your car.

The MINI has the cleanest engine here, as it emits 164g/km of CO2. Even though it has a higher list price, lower-band users will shell out £669 annually – the cheapest here.