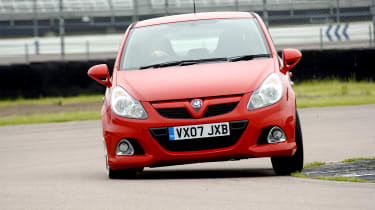 To succeed in the performance supermini sector, you need to have a strong selling point – something which grabs buyers. And the visual impact of the Corsa VXR is sure to do that. Some may criticise it for being brash and unsophisticated – maybe even a bit too ‘boy racer’ – but while it divides opinion, there’s no denying it fits the bill as a hot hatch.

It’s by no means understated, yet from any angle it’s athletic and purposeful. This is unashamedly a full-blown pocket rocket, and certainly not for shrinking violets – indeed, its extreme appearance leaves the 207 looking even more pedestrian. Vauxhall has made the most of the new Corsa’s sporty shape and added to it with restyled bumpers, a rear diffuser and plenty of spoilers and skirts.

There are other nice details, too, such as the triangular theme running through the car’s design, which appears in various elements including the exhaust, foglamps and even the wing mirrors. Our car was fitted with the larger 18-inch alloy wheels, which cost £400 and are the biggest ever offered as an optional extra on a supermini.

However, the cabin doesn’t reflect the sporty look of the exterior. It appears well finished and sophisticated, though – and most importantly gives you that feelgood factor once you’re behind the wheel.

The driving position is excellent, courtesy of the low-slung chair and massive amount of steering adjustment, while the hard-backed Recaro seats offer superb all-round support. There are gripes, though. The A-pillars are thick and hamper visibility at junctions, while the doors are heavy. With a shorter wheelbase and bigger front seats than both the 207 and Clio, the Corsa suffers in terms of rear legroom, too, while the boot is smaller than either French car’s.

Thanks to its 189bhp 1.6-litre engine, the VXR is the most powerful Corsa ever, and it shares similar performance traits with the larger Astra VXR. It has a wide power band and snappy throttle response, while hard acceleration creates an unusual – and not particularly pleasing – induction noise. It’s not an easy car to drive slowly, either, due to its rather sudden, snatchy power delivery, and the pedals aren’t as positive as the MINI’s.

As with the Cooper S and GTi, the Vauxhall has an overboost function, which raises torque by 30Nm to 260Nm for five seconds at full throttle. This makes overtaking a breeze – the 30-70mph sprint is polished off in 5.6 seconds – although the nose can become a little light when accelerating.

The engine tips the scales at 131kg, which helps ensure the Corsa has the lowest kerbweight here. This meant it posted the fastest 0-60mph time, at 6.6 seconds, although only four-tenths-of-a-second separated our quartet.

The eager and responsive nature of the engine is reflected in the chassis. Lower than the standard car by 12mm at the front and 19mm at the back, the Corsa has a new spring and damper set-up which reduces roll by 25 per cent. The result is an agile but composed hatch which is great fun on a twisting country road. Even the ride is well damped, while the balanced chassis comes close to rivalling the Clio’s edginess and involvement.

At £15,610, the VXR is cheaper than the MINI and Clio, and it comes with air-conditioning, electronic stability control and a multifunction steering wheel all as standard.

Price: £15,610Model tested: Vauxhall Corsa VXRChart position: 2WHY: The VXR’s extreme styling looks the part, and we’ve been impressed by its all-round ability.

Of the 1.6 turbo units, the VXR’s was thirstiest, at 31.2mpg. That’s still respectable for a supermini hot hatch, but the Corsa’s small 45-litre fuel tank limits its range.

The VXR is the strongest residual performer in the Corsa range, and is the best hot Vauxhall as well. It’s worth 45.5 per cent – or £7,181 – after three years.

Vauxhall fared slightly better than the French duo in Driver Power, but 23rd is still poor. The consolation is that the £485 servicing total is cheaper than for the Clio and 207.

Company car drivers will find the VXR a pricey option. It’s 9g/km cleaner than the Clio, but only sits one tax bracket below, so lower-band owners will pay £859 a year.