Built here in Britain, the Civic is the most futuristic of our test line-up 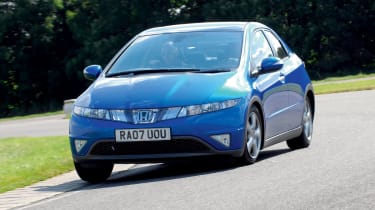 If we have one concern about the Honda Civic, it’s that the unique looks will not stand the test of time. So far it’s ageing reasonably well, but with no other firm having copied its futuristic theme, and Honda not using it as a template for any other car in its range, the family hatch does rather sit out on a limb.

We still think the Japanese marque deserves praise for being so bold, though. The full-width light clusters front and rear look neat, as do the arrowhead door handles – although they don’t feel particularly well made.

They’re about the only thing on the Civic that seems flimsy, though. Inside, most of the materials aren’t quite as soft and pleasing to the touch as the Peugeot’s, but the construction is faultless. Put simply, it’s as if the quality control experts have worked in perfect harmony with the designers, engineers and packaging people to create a cabin that is tough and innovative, yet user-friendly.

Initially the interior layout can be rather intimidating, but live with it for a few days, and you realise how clever it really is. There’s plenty of stowage, a wide range of steering adjustment, comfortable seats and comprehensive controls. It’s not flawless, though. You sit a touch high, the stereo has been moved across too far and although it comes with a glass roof, it’s split by a central beam, so doesn’t let in anything like as much light as the 308’s.

It’s even darker for those sitting in the back – not least because the rear doors are small and the C-pillars thick. The trade-off is a massive 100mm more legroom than the Peugeot, while the brilliant rear seat mechanism, which folds entirely flat in one movement or lifts up cinema style, helps make the Civic by far and away the most versatile family hatch on the market.

Hard though it is to believe given the dramatic styling, there are plenty of estates and people carriers that would be delighted to match its practicality. It has a low load sill and useful two-position boot floor.

The engine isn’t as flexible, of course. The normally aspirated 1.8-litre i-VTEC revs to 6,800rpm and only produces peak torque when the needle reaches 4,300rpm.Unsurprisingly, this means low-down pull isn’t great, so in-gear times were close to the Peugeot’s. However, on the road it comes across as more tractable, and the slick, fast shift means changing gears is no chore.

It also sounds pretty sporty, and if you use the whole rev range, it’s quick, too – nearly as fast as the more powerful Fiat, in fact. But best of all, the Honda is superbly engineered. The brakes may be a bit wooden, but the drivetrain is beyond criticism – the clutch is light, traction good, there’s no slack or vagueness at all, and this makes the Honda very easy to drive.

The ride isn’t as supple as the 308’s, but the Civic posted the lowest noise levels across the board, so long journeys are fuss-free. And twistier roads give the Civic a chance to shine. The steering is sharp, which means it’s faster to respond than its European competition, and the chassis is nicely balanced, if not as fluid and relaxing as the Peugeot’s.

The Honda is also a very satisfying car to own. Admittedly, the £16,127 asking price is higher than its rivals’ here, but equipment levels are a match, and the Civic’s low running costs and strong residuals are tempting.

The Civic was the most economical car here. Honda’s promise that the 1.8 delivers the pace of a 2.0-litre with the economy of a 1.6 is correct. We averaged 36.5mpg, although the 50-litre fuel tank means it has the shortest range.

If you care what your car will be worth in three years – and let’s face it, who doesn’t? – the Honda is the only sensible choice. Holding on to 10 per cent more of its value than the Fiat, it costs £2,132 more to buy, yet loses £242 less.

Again the Civic is the best bet. Honda’s prices are reasonable, the hatch comes with a 90,000-mile warranty and three-years’ recovery, while Honda dealers came second in our 2007 survey, well ahead of Peugeot in 28th.

Reinforcing its status as the most economical car here, the Civic also has the lowest CO2 levels. For business users it’s taxed at 17 per cent, and so is marginally cheaper than either of its rivals. Not bad, considering it’s the most expensive to buy.