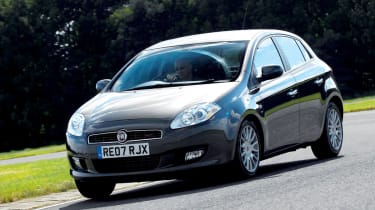 Peugeot has taken a small step with the 308, but Fiat’s Bravo represents a giant leap forward. The five-door is leagues better than the Stilo it replaces – not least in the way it looks. The boxy lines of the old car have been replaced with more voluptuous bodywork. The window line slopes down heavily towards the nose, giving the Bravo a dynamic appearance that’s both sporty and sophisticated.

It’s not exactly cutting-edge, but the well integrated light clusters and Fiat’s new red badge enhance this upmarket look. The trouble is Fiat doesn’t seem to have worked as hard as Peugeot inside to maintain that standard.

The dash layout isn’t as attractive, and there’s an odd blend of plastics; for instance the chequered trim looks brittle, but is actually quite soft to the touch. The seats could also do with more underthigh support, and the centre storage bin is too small to be useful. But although the driving environment falls slightly behind either of its rivals, it’s still a pleasant place to spend time – and there wasn’t a single trace of a rattle or squeak at any time. The Fiat felt very well put together indeed.

The seats aren’t great, though. They’re low-set, unsupportive and firm, and there’s not much in the way of legroom. The Bravo is also comparatively small and dark in the back – although it’s worth noting that an optional SkyDome glass roof will be available soon – and is the most cheaply trimmed. This budget feel also applies to the boot. Our measurements made it fractionally smaller than the Peugeot’s, although Fiat claims a 308-beating 400-litre volume.

There are no grey areas when it comes to performance. The Italian car showed its French rival a clean pair of heels in every area. A 0-60mph time of 8.3 seconds was nearly three seconds faster, while the 9.5-second 50-70mph time in top was 4.7 seconds ahead. This pace is down to Fiat’s 1.4-litre T-JET motor. The first of a new family of turbocharged engines, it’s claimed to not only produce good power, flexibility and refinement, but also reduce fuel consumption by up to 20 per cent.

There’s a fair bit of turbo whistle and it’s not as well insulated as the Peugeot’s unit, but the delivery is so linear that it’s hard to believe there’s only a 1.4-litre engine working away under the bonnet. Although the six-speed gearbox is not as robust or sweet-shifting as the Honda’s – chiefly because it has a long throw – it’s still crisp and positive.

Overall the Bravo is good to drive. It has a tight turning circle, extra steering assistance courtesy of the City mode button, and generally comes across as agile and nippy. In the low gears the turbo has enough punch to overwhelm the tyres, but on the whole it all works very harmoniously.

The ride is neither crashy nor harsh, and although not as well damped or quiet as the Peugeot, it’s a capable cruiser. It’s also quite engaging when you’re in the mood to have fun. True, the steering is numb and gives little clue as to what the front wheels are up to, but otherwise it’s well behaved and composed, and has a more sporting demeanour than either rival.

It also offers far superior value for money. A price of £13,995 is excellent for a car with such an impressive engine, improved build quality, good looks and a kit list not far off matching the 308’s.

Price: £13,995Model tested: Fiat Bravo 1.4 T-JET 150 DynamicChart position: 2WHY: On sale since the end of June, the Bravo promises to offer exceptional value for money.

The Bravo fared the worst of these three, averaging 31.7mpg, but that’s largely because we were unable to resist the turbo’s punchy performance. Drive gently, and we have little doubt it would prove more efficient.

Great lengths were taken by Fiat to distance the Bravo from the Stilo, and in terms of residuals it has paid off, with used values up around eight per cent on average. However, base models are the only ones to beat the 40 per cent mark.

Fiat owners rated its dealers 31st out of 32 in Driver Power 2007, but there are signs of a turnaround. We’d hope so too, given the prices we were quoted for the Bravo. A total of £770 for three check-ups is £200 more than both rivals.

It’s powerful, but as the Bravo’s engine is brand new, we had hoped it would fall into a lower tax bracket. Emissions of 167g/km place it two bands higher than the Peugeot, although its low price means it’s a slightly better financial option.