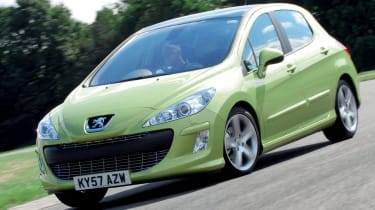 Evolution, not revolution, defined Peugeot’s strategy for the 308. The strong family look that started with the 206 supermini has been developed into a one-style-fits-all approach. And from a distance, the 308 is largely indistinguishable from either the 207 or 307.

The styling pioneered on this car’s predecessor means that the two are virtually identical when viewed in profile, and they also share the same floorpan and wheelbase.

However, the in-house design team did have a go at enhancing the front and rear ends. The nose is now sharper and more aggressive, and the tail has a clean, simple look akin to the 407 Coupé’s. Sadly, unlike the Bravo, nobody gave the 308 a second glance while we were driving it.

The lines are slightly tauter than the 307’s, but it’s only 74mm longer and 53mm wider. What’s more, most of the size gains have been added to the nose to boost crash protection, so the 308 doesn’t have the same spacious quality as the Civic. For starters the boot sill is very high, the 348-litre load volume lags 137 litres behind the Honda, and in order to fold the rear seats, the front chairs have to be slid forward. From the word go, it’s clear that practicality was not at the top of Peugeot’s agenda here.

The firm’s main concern was to improve the look and feel of the cabin – and it has been successful. The centre console, white dials and shapely steering wheel give the 308 a sense of quality and design that beats the Bravo, while the soft-touch dash plastics are better than the Civic’s.

The button-heavy stereo remains, though, and is one of a few weaknesses that include a tiny glovebox, pointlessly shallow cup-holders and a narrow footwell. Undoubtedly the best feature is the Cielo glass roof. Standard on SE and GT models, the one-piece top ensures the Peugeot has a beautifully light and airy cabin. It’s best enjoyed from the rear seats, where the effect is like sitting in a Perspex bubble and draws your attention away from the modest legroom.

If only it could do more to cover up the engine’s deficiencies. In the MINI Cooper, the normally aspirated 1.6-litre unit delivers decent thrust, but in the larger, heavier 308, it’s gutless. Our car had only covered 600 miles – which explains why we failed to match Peugeot’s claimed 0-60mph figure of 10.8 seconds – but at no time did the engine seem to come alive or feel even slightly energetic.

It didn’t help that Peugeot’s five-speed gearbox is so poor, with a vague shift and high-biting clutch. At least the 120bhp powerplant remains quiet and composed at all times.

The same applies to the driving experience. Here the Peugeot shames the Honda with a very well judged blend of ride and handling. Our car wore wide tyres on its 17-inch alloy wheels, which created some road noise, but wind intrusion was almost entirely absent.

Overall, the 308 is very capable, but not much fun. Peugeot’s 306 proved that everyday hatches could entertain, yet later cars have grown more mature and lost their spirited nature. This newcomer has taut steering and good visibility, but needs a slicker drivetrain to be genuinely user-friendly.

It could also do with being considerably cheaper. Nearly £16,000 is a lot to pay for a mid-range hatchback, and although good, equipment levels aren’t particularly exceptional.

Although the 308’s 1.6-litre engine delivers 18bhp less than the Honda’s 1.8-litre unit, Peugeot’s claimed economy figures are poorer. With no six-speed gearbox, and low torque, it managed only 32.4mpg with us.

The 307 was a disaster on the used market. Poor reliability and low customer satisfaction levels left it with a resale value after three years of only 35 per cent. Despite the superior interior, it’s hard to see the 308 performing significantly better.

Prices quoted here are for the 307 – dealers have yet to have the chance to fully assess the 308. But with similar mechanicals, we doubt costs will change much at all. The long 20,000-mile service intervals are good, too.

The 308’s engine is by no means dirty, with CO2 levels kept to 159g/km thanks in part to clean 0.30Cd aerodynamics. But that’s not enough to prevent it being marginally the most expensive for company car users to run.