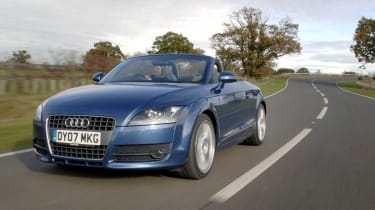 Even though Audi doesn’t quite have the sporting heritage Alfa enjoys, the original TT caused a massive stir when it was launched in 1999. Not surprisingly, the roadster version followed very soon after. The new car has already built on its popularity, and we think the current shape is much better suited to the convertible bodystyle. The design wasn’t groundbreaking, but the latest TT has an athleticism its predecessor lacked.

The angular headlights and flared arches add to the overall smooth shape, helping in the process to create a drag coefficient of 0.32Cd – much lower than the Spider’s 0.37Cd figure. Our test car came fitted with Audi’s optional 19-inch two-piece alloy wheels, which we think look great. But at £1,650, these aren’t cheap, and they are also a pain to keep clean!

The cabin is well laid out and has an air of sophistication, despite lacking the Alfa’s charm. Plenty of chrome details contrast pleasingly with the black plastics, although we’re not convinced about the Mineral Grey leather on the seats.

Still, from behind the wheel, the Audi is more driver focused than its rival. The low-slung seats offer far more support than those in the Alfa.

In common with the Spider, the roof is fully automatic and operates at the touch of a button. The Audi’s system is much quicker – important if there’s a sudden downpour – but, with no cover, ugly gaps are left on either side of the fabric when it’s stowed. And that’s a surprise, given the precision in the rest of the car.

The 2.0-litre turbocharged FSI engine is a VW Group mainstay, most notably found in the Golf GTI. In the TT it’s superb, with a great, rasping exhaust note. It delivers strong performance, too. So, despite having 2bhp and 120Nm of torque less than its opponent in this test, the 198bhp Audi feels much quicker on the road, especially when accelerating from low speeds.

There’s no lag from the turbo and torque peaks at only 1,800rpm – that’s 200rpm sooner than the diesel Alfa. Thanks to a slick gearchange and linear power delivery, the TT is a smoother and more enjoyable car to drive.

So we were surprised how much quicker the Audi was at the test track. It completed the sprint from 0-60mph in seven seconds exactly, to the Alfa’s 8.7 seconds. And it impressed in-gear as well. The TT covered 30-70mph in 6.8 seconds, while the Spider took 7.7 seconds.

Unlike the range-topping 3.2 V6, which has a quattro four-wheel-drive option, the 2.0T FSI is available only with front-wheel drive. That makes it lighter and more agile than the quattro – we would certainly opt for it over the more expensive variant. It turns in sharply and remains stable in corners, while delivering a degree of involvement that’s missing from the previous generation.

Our test car was equipped with the optional Magnetic Ride system. While pricey at £1,150, the set-up adapts impressively to different road conditions. The TT isolates imperfections better than the Spider, and the ride is smoother. The bodyshell feels rigid and, in contrast to the Alfa, there’s no vibration or shake through the cabin.

While the Audi costs less to buy than the Spider, it doesn’t have as much kit. The options list is extensive and expensive – our car had nearly £9,000 of extras. Does that count against it?

Price: £26,940Model tested: Audi TT Roadster 2.0T FSIChart position: 1WHY: Our current class favourite is cheaper than the diesel Alfa, and is sure to put up a strong fight.

The TT wasn’t far behind the Alfa's diesel, returning 28.8mpg. Not bad for a petrol turbo, but the 55-litre tank is 15 litres smaller than the Alfa’s, so it runs out of fuel 125 miles sooner, after 348 miles.

With its blend of desirability and reliability, the Audi is always in demand. Over three years, the 2.0 FSI holds on to 62 per cent of its value – the best in the TT range.

The TT’s clean and efficient FSI turbo produces 186g/km of CO2. So lower-band business users pay £1,422 a year – as long as they resist shelling out on cost options.