Is diesel the best choice for a roadster? We find out as the new Alfa Spider JTDM meets the petrol-powered Audi TT 2.0 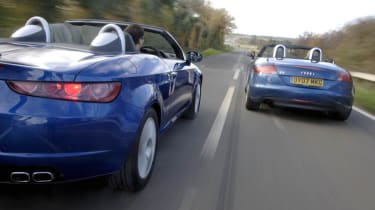 The mere sight of a spider is enough to strike fear into many of us. Even though it’s irrational, it’s a phobia plenty of people share. And until recently, roadster fans would have felt a similar aversion to the idea of diesel power.

After all, while derv engines are good for executive saloons and family hatches, surely they would never be desirable in a soft-top? Now, however, you can get a Spider powered by diesel. Not the arachnid kind, of course, but the new two-seater from Alfa Romeo.

Buyers have had a choice of only two petrol engines up to now: a 2.2-litre JTS and a 3.2-litre V6. But the Italian brand has just taken the brave step of launching a 2.4-litre JTDM version.

Four-seat convertibles such as the Audi A4 and BMW 3-Series are already available with oil-burning powerplants. Yet by fitting the 200bhp unit into its Spider, Alfa has become the first car maker to launch a diesel roadster in the UK – surprising for a firm with such a strong sporting heritage.

The unit is already offered in other Alfa models, and has strong credentials, as it delivers 400Nm of torque and promises 40mpg economy. But how much sense does it make in the soft-top?

We find out by testing the latest Alfa against a more conventional, petrol-powered roadster: the entry-level Audi TT Roadster 2.0T FSI. This is currently our class favourite, so the Spider faces a tough test. Can it scare off the competition?

In theory, a diesel roadster makes plenty of sense. You get all the style and posing ability of a soft-top, but with oil-burning economy. Yet cars such as the Spider and TT are bought with the heart, so running costs are not always necessarily top of the priority list. Indeed, such is the romance surrounding the Alfa brand, it’s a surprise to see it lead the way by being the first to bring a diesel roadster to the market.

The Spider JTDM is a smooth and refined performer. And while its harsh engine note means you are always aware that it’s powered by a diesel, this isn’t quite the drawback you might imagine.

When compared to the petrol Audi convertible, however, the Spider in this form doesn’t quite add up. The Alfa costs £2,000 extra to buy and didn’t prove as economical as we had hoped – averaging only 1.9mpg more than the TT. The Audi has better dynamics, too – it’s more fun and has a superior ride, even without our car’s suspension upgrade.

So the TT takes the victory here. But don’t discount the Spider out of hand – the character and charm exuded by the Italian roadster are still endearing.