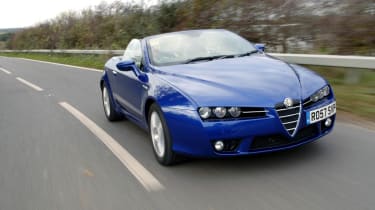 Romantic, stylish and sporty are three words people associate with the Alfa Romeo brand. Unreliability is another – the maker has gained a reputation over the years for lacklustre build quality. However, it has continued to produce gorgeous cars, and the latest in the line-up proves it has lost none of that flair.

Given the marque’s strong design heritage, the new Spider has a lot to live up to. Based on the Giugiaro-penned Brera coupé, it was developed by Pininfarina and is assembled at its plant in Turin. The result is a distinctive, beautifully styled soft-top that looks good from every angle.

A strong rising waistline gives the Alfa an athletic stance, while the unusually shaped tail-light clusters are great. An office straw poll revealed most people think the newcomer is better looking than the Brera, thanks to neat touches such as the raised ‘shoulders’ on the rear deck.

It’s also shorter and lower than the coupé, so headroom is limited with the fabric hood up. However, the driving environment itself has real charm. The three sunken dials that dominate the centre console add to the special feel, and the brushed chrome trim gives it an upmarket air.

But while the plastics are all good quality and the finish is decent, it’s not a patch on the superbly constructed Audi.

It’s the same story with the fully automatic roof. It takes nearly twice as long to fold down as the TT’s, and in our test car, the lid repeatedly clipped the top of the roll hoops. Sound insulation isn’t as good as the Audi’s, either – at 70mph, our meter was reading 81dB in the Alfa to 76dB in the TT.

Drop the hood and the Spider looks neater – and it’s with the roof down that these cars are designed to be driven. If you’re concerned that the clatter of the diesel engine will spoil the experience, there’s no need to be. It’s a bit coarse when cold, but otherwise the 2.4-litre Multijet unit is well mannered and keeps its refinement, even when pushed hard. The unusual thrum gives the five-cylinder powerplant character, and it has real punch, too, making overtaking a breeze. This is certainly our pick of Alfa’s current engine line-up.

Despite having 400Nm of torque – 120Nm more than its rival – the Alfa doesn’t share the response of the Audi, which has shorter gearing and a wider powerband. That was evident at the test track; the Spider covered 0-60mph in 8.7 seconds, so it trailed the TT by 1.7 seconds. In spite of the diesel’s torque, it was behind during our in-gear tests, too.

The car was hampered by its 1,660kg weight – a significant 365kg up on its rival. A rather notchy gearchange didn’t help, either. Unfortunately, the Alfa’s heavy frame also affects its handling. While there’s plenty of grip and the steering is very sharp and responsive, this car is simply not as agile as the Audi.

The Spider has more body roll and doesn’t like sudden changes of direction. And the frame shakes even on smooth roads. This can be an indication that the Spider isn’t as solidly constructed as its rival, and the ride is disappointing.

If you’re expecting the Alfa to be cheaper than the TT, think again. It costs £2,000 more than the German car – and this JTDM also carries a £3,000 premium over the petrol 2.2 JTS Spider.

For that, you get plenty of kit, with parking sensors and cruise control as standard – these are options on the Audi. The question is, will the better spec make up for the Alfa’s flaws in this test?

A key aspect of the JTDM Spider is its economy: Alfa claims 41.5mpg combined. So we were disappointed by the 30.7mpg it averaged on our test route, which included plenty of motorway miles.

Italian brands aren’t known for their strong resale values, but the Alfa bucks the trend. After three years, it’s worth £17,615 – that’s an impressive 59.2 per cent of what it cost new.

While £669 for three services is reasonable, Alfa garages have a poor reputation. They came last in our Driver Power 2007 dealer survey. That is likely to deter many buyers.