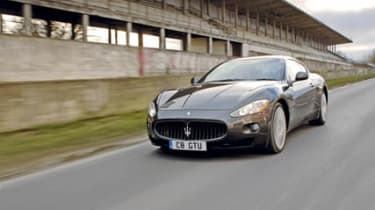 Those whose memories of Maseratis are dominated by the boxy, inelegant cars of the Eighties should take this opportunity to reacquaint themselves with one of the most glamorous and evocative automotive brands of all-time.

Let’s not pull any punches here: even in dark grey (the firm calls it Grigio Granito), the GranTurismo is more stylish than any German model – a Porsche included. In fact, we’d argue that neither the Aston Martin nor the Jaguar can match the exuberance of the Maserati. The car has flair, and a real sense of drama and passion.

It doesn’t offer the clean and simple lines of the N400 and XKR – you could say that the GranTurismo is a touch fussy. But the detailing is great. The concave grille, the portholes behind the front wheels, those athletic front haunches you can see from the driver’s seat... it all blends perfectly with the car’s sweeps and curves.

The Maserati wears its Pininfarina badge with pride – and what the styling house deserves most credit for is the way it’s disguised the sheer size of this two-door. It’s huge, with a wheelbase that’s nearly 200mm longer than the Jag’s.

Surprisingly, it has the smallest boot – a 260-litre load bay that lacks the versatility of its hatchback rivals. But the GranTurismo has a trump card up its sleeve. The long gap between the axles means there’s room for a set of rear seats, and they’re quite spacious, with 660mm of legroom – on a par with a family hatch.

Just because the Maserati is big inside doesn’t mean it’s bland. As with the Aston, when you first slide behind the steering wheel you’ll probably take a minute just to enjoy the ambience. The rich, tactile materials, shapely steering wheel and chrome-ringed buttons look superb.

It’s a vast step on from the firm’s Coupé in terms of ergonomics and comfort, too – although that’s not to say it’s flawless. You have to reach a long way back for the seatbelt, the sat-nav is lifted out of a Peugeot (and isn’t very intuitive to use) and there’s no cancel button on the cruise control.

Still, who wants to take it easy when under the bonnet is a 4.2-litre V8 with the ability to rev to 7,500rpm? It’s a cracker – eager, hungry for revs and tuneful. As with the Aston, there’s always a bit of background engine and exhaust noise.

Given the Maserati’s 1,880kg kerbweight and long gearing, we didn’t expect it to be so fast. Yet it beat the supercharged Jaguar in the sprint from 0-100mph, with a time of 11.9 seconds. Use the V8 hard and it’s magic. But on a daily basis, it can be frustrating. There isn’t enough mid-range pull (50-70mph took nearly twice as long as in the N400, at 14.3 seconds), and the automatic gearbox does its best to ruin things.

The problem is it doesn’t give you full control, even in manual mode. There’s no noticeable step in the throttle travel; the transmission drops down gears by itself, which is rather unnerving. That’s a shame, because the GranTurismo is a capable driver’s car. While it’s not as polished as the XKR, we think its flaws add character. There is a little more wind and road noise, the Skyhook adaptive dampers feel fidgety compared to the Jag’s CATS system, and the Maserati loses its composure sooner on bumpy roads.

Yet once you’ve got used to the sharp, light steering and alert chassis, this car is fun, with lots of feedback. What lets it down is the fact it’s pricier than the Jag, but can’t match its standard kit tally.

Price: £78,500Model tested: Maserati GranTurismoChart position: 3WHY: Replacement for the Coupé, the all-new GranTurismo shares its platform with the Quattroporte.

It's a big, heavy car, yet long gearing meant that the GranTurismo cruised at more than 23mpg. Economy tailed off when high revs were used, and we recorded 17.9mpg – although the 339-mile range was the best on test.

The Italian marque’s models fare nearly as well as Aston’s on the used market. A 2005 Coupé with 20,000 miles goes for around £45,000 – a retained value of 65 per cent. The GranTurismo should perform even better.

If you think the Vantage is expensive to keep in good health, then prepare for a shock. One of the 16 Maserati UK dealers we spoke to quoted £3,999 for three visits, with the 25,000-mile service alone costing £1,757!

Anyone who pays the higher rate of income tax will have to shell out at least £10,990 a year to run a GranTurismo as a company car. If their model is specified with as many options as ours, that figure jumps to £11,996.