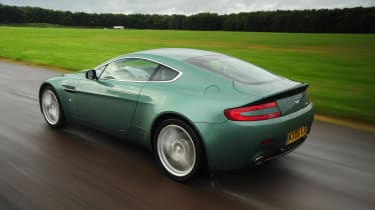 If the 911 is the quintessential Porsche, the V8 Vantage looks every inch an Aston Martin. With its distinctive grille and sleek headlamps, the entry-level car is guaranteed to turn heads – it gets far more admiring glances than its understated rival here.

Climb inside and the cabin follows the glitz of the exterior. Glossy piano black trim features on the centre console and the instruments have a hi-tech metallic backdrop. There’s even a pop-up screen for the optional satellite navigation system, although its controls are more complicated than the touchscreen set-up now offered in the Porsche.

The bad news for the Aston is that it’s not as well built as its rival. If you look closely you’ll even find pieces of poorly fitting trim.

Start the engine and the last thing on your mind will be some shabby build quality. Push the key (Aston calls it the Emotion Control Unit) into its recess on the centre console and the 420bhp V8 barks into life. There’s no traditional lever, so to select a gear you either press the button marked D for ‘drive’ on the centre console or tug the right-hand paddle behind the steering wheel. Then you simply release the fly-off handbrake to the right of the driver’s seat and take your foot off the brake to pull away.

The differences between the transmissions are immediately apparent. The Aston’s single-clutch Sportshift system – a £3,000 extra – is neither as smooth nor as fast as the PDK, and in stop-start traffic the clutch engages with a jolt.

Increase the pace and gearchanges are punctuated by a marked hesitation in acceleration. Plus, unlike with the seamless Porsche set-up, to get a perfectly smooth upshift you have to lift off. The PDK doesn’t hold all the aces, though, as Aston’s Sportshift is much more logical to use.

Its alloy paddles are fixed to the steering column, and you simply pull the left-hand lever to change down and the right-hand one to shift up. This arrangement couldn’t be simpler, and takes no time at all to get used to. Another plus is that the Aston doesn’t kick down mid-bend if you accelerate hard in a higher gear.

Ultimately, though, the 911 wins the engineering battle. The Vantage gearbox never feels as quick as the PDK and its downchanges lack drama. Rival automated manual boxes from the likes of Maserati and Lamborghini provide a satisfying blip of the throttle to accompany downshifts, but the Aston doesn’t and it’s far less exciting as a result. Considering the bellowing V8 soundtrack and powerful performance, this has to go down as a missed opportunity.

Enthusiasts will also prefer the Porsche’s handling balance, as the Vantage simply doesn’t have the same composure or outright grip as the 911. There’s unwelcome steering kickback and its rear suspension allows too much body roll during fast cornering to inspire confidence at the limit.

There’s no doubt the 911 is smoother, faster and more efficient – but that doesn’t make it any more special. As with any Aston, this V8 Vantage is greater than the sum of its parts. We just wish one of those parts was a manual transmission rather than the Sportshift gearbox...

Exclusivity comes as standard with every Aston Martin, and that has a big effect on residual values. According to our experts, the V8 Vantage trumps the Porsche because it will still be worth an amazing 58.8 per cent of its new price after three years and 30,000 miles. However, all is not what it seems, because the lower list price of the Porsche means it actually sheds less value. The 911 will lose £35,695 over this period, while the value of the Aston will drop by £36,256. Inferior economy also results in higher fuel bills for the Brit, and the Aston is likely to cost more to insure than its German opponent.

Emissions are shocking, at 312g/km. That’s much more than the 911, and the V8 Vantage only has two seats – so there is no chance of sharing the burden with passengers.