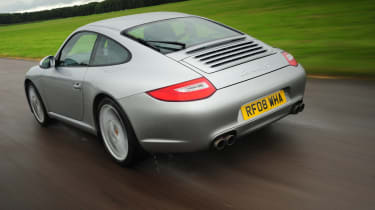 Not many modern cars can trace their roots back 45 years, but this is the kind of rich heritage that makes Porsche’s 911 so special. The legend has evolved into a hugely capable sports car, and the German manufacturer has just unveiled a raft of improvements designed to keep it at the head of the field.

From the outside, only the revised rear light clusters and LED daytime running lamps give the game away – the company has wisely left the trademark looks well alone.

Designers have followed the same approach with the beautifully crafted cabin, although buyers now get the option of a superb touchscreen interface to control the stereo, sat-nav and phone, as well as improved ventilation controls.

The big news comes under the skin. The distinctive flat-six 3.8-litre engine now features direct injection technology to reduce fuel consumption and lower emissions. It works: the 911 returned 15.3mpg during its time with us and officially produces 240g/km – giving it better economy and CO2 output than its more powerful rival.

But this car is all about its new transmission: the catchily named Porsche Doppelkupplungsgetrieb, or PDK. This translates as double-clutch gearbox, and the set-up – a £2,338 option – works on the same principle as VW’s DSG system.

It’s certainly easy to use. Select Drive using the conventional shift lever and away you go. The creep built into the system as you release the brake arrives smoothly and progressively, so it feels like an automatic when manoeuvring at low speeds and in stop-start traffic. Left to its own devices, the PDK makes Porsche’s old Tiptronic feel clunky – gearchanges in auto mode are well timed, and are barely noticeable compared to the more mechanical shifts provided by the Aston.

Seize manual control, though, and the PDK reveals some irritating flaws. Our biggest gripe concerns the gear selection buttons on the steering wheel. You push them to change up and pull them towards you to change down, which is counter-intuitive because as your weight is pushed forwards under heavy braking you need to pull on the buttons to downshift. It’s also easy to catch these buttons with your thumbs during cornering, causing an unwanted upshift at just the wrong moment.

As an alternative you can use the shift lever on the centre console, but its beautifully spring-loaded action is configured to operate like the fiddly steering wheel buttons.

Our other complaint is that the PDK software kicks down too readily, robbing the driver of ultimate control. Enthusiasts will no doubt prefer the more tactile and rewarding manual gearbox, although the 911 PDK is quicker against the clock – and it can show the Vantage a clean pair of heels.

While the Porsche has 35bhp less power than the Aston, it covered 0-60mph on a wet track in 4.4 seconds – seven tenths up on the British car.

The PDK is an impressive piece of engineering, and it makes exploring the 911’s excellent handling, huge grip and tremendous brakes easier than ever. As a replacement for the old Tiptronic it’s extremely effective. But is the Porsche package good enough to win?

Price: £72,698Model tested: Porsche 911 Carrera S PDKChart position: 1WHY: The revised 911 features an all-new twin-clutch gearbox, but does this improve on an already impressive package?

Look at our data bank above and you’ll immediately see how much cheaper the 911 is to live with than the V8 Vantage. Not only does it cost £15,302 less to buy, but maintenance and insurance costs are significantly higher for the Aston. Individual services will set you back roughly half as much in the Porsche and aren’t needed so often – every 18,500 miles, rather than every 12,500. On the downside, the 911 has an extensive options list, so be prepared to spend more than the quoted list price. For example, the full-colour Porsche badges on the centre caps of the alloy wheels of our test model cost an extra £107!

Although the plain Carrera squeezes into band F for road tax, our more powerful S test car emits 240g/km of CO2, and so sits in band G. It’s still cleaner than the Aston, though, and more economical, too.