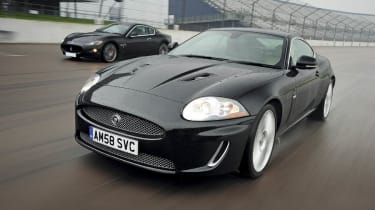 The XKR was already in a class of its own – but that hasn’t stopped Jaguar improving its flagship. To meet the challenge of the latest Maserati, the 4.2-litre V8 has given way to the firm’s new 5.0-litre – increasing power from 410bhp to 503bhp.

Designers have also taken the opportunity to tweak the coupé’s looks. New LED rear light clusters are fitted across the XK line-up, and the XKR’s purposeful alloys are shared with its XFR stablemate. But crucially, the cheap plastic grille of the old car has gone. You now get smart alloy-rimmed cooling ducts in the front bumper and a wire mesh grille. It’s an undoubted improvement – although the Jag still can’t match the flair of the Maserati.

The cabin has been enhanced, too, and the centre console is now home to the classy pop-up rotary gear selector first seen on the XF saloon. Its familiar pulsing red starter button adds to the sense of occasion as you make yourself comfortable inside. The back seats are still only good for shopping bags, but they’re the sole disappointment inside.

An attractive dashboard, luxurious trim and solid build give the cabin a high-quality feel. And with touchscreen sat-nav, full iPod integration, cruise control and parking sensors as standard, the Jaguar is well equipped.

Look under the bonnet and the hot coupé uses the same 5.0-litre V8 as the standard XK. But a supercharger increases power from 380bhp to 503bhp and torque to an impressive 625Nm. On paper, those figures leave the normally aspirated Maserati gasping for breath, as it can only manage 433bhp and 490Nm respectively.

Hold down the button to start the engine and there’s little sign of the performance on offer, because the V8 takes on a muted rumble that isn’t as dramatic as the GranTurismo S powerplant. Any doubts are dispelled as soon as you hit the road, though, because maximum torque arrives at 2,500rpm – that’s 2,250rpm lower than in the Maserati.

It is accompanied by the characteristic whine of the supercharger, and makes the Jaguar much more responsive, with ferocious acceleration available at any speed. At our wet test track, both cars struggled for traction, and recorded identical 6.1-second 0-60mph times. But once up and running, the Jaguar is faster.

In slippery conditions and with the traction control off, it demands real concentration, though, as the instant response of the engine makes it easy to spin the rear wheels under acceleration – even when travelling in a straight line.

The XKR has a very different character to the Italian coupé. Its supple suspension allows greater body roll, but provides a much more comfortable ride. The automatic transmission is much smoother than its rival’s automated manual set-up, too. So while the Jaguar lacks the pricier Maserati’s visual and aural drama, it’s a more refined and comfortable cruiser – with sledgehammer performance.

WHY: A bigger supercharged engine and more power than before promise to make the new XKR faster than ever.