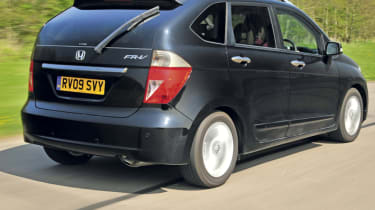 Despite its innovative six-seater layout, Honda’s FR-V is a rare sight on our roads. That means many families are missing out on the immensely practical cabin that marks out one of the most capable Hondas.

Launched in 2004, the FR-V follows the same route to six-seat transport as Fiat’s Multipla. A conventional three-seat layout in the rear is reflected in the front, with the sixth passenger snuggling up to the driver.

In practice, the format really works. With the gearstick on the dash and a van-style pull-out handbrake, there’s plenty of space for the extra person in the front. And when you want to use the car as a five-seater, the central front chair folds down to make a sizeable armrest or table.

But does a six-seater provide a solution to a problem that doesn’t really exist? After all, if you need extra people-carrying ability over and above a standard five-seater, you’re probably better off going for a conventional seven-seater model.

Wherever you sit in the Honda, you will be comfortable. While the car in our pictures is in EX trim, complete with sumptuous leather, the FR-V ES is closer on price and spec to Volkswagen’s Golf Plus SE. It makes do with cloth seats, but doesn’t scrimp on comfort.

The Honda is 15cm longer than the Plus, so its luggage space is more useful – it feels like a proper MPV rather than a more practical hatchback. On paper, the FR-V should make up further ground as its 1.8-litre petrol unit has an advantage in terms of capacity and power. But in practice, the FR-V feels sluggish next to its turbo rival. With its 174Nm peak torque output not arriving until 4,300rpm – the Golf’s 200Nm comes at only 1,500rpm – the Honda has to be worked hard to keep up.

However, the gap between the engines was narrower than the official figures suggest. With CO2 emissions of 177g/km, the FR-V puts out 25g/km more than its competitor, so tax costs are higher. Yet it managed 35.3mpg in our test. And owners can expect to achieve better, as our figure included performance runs at the test track. In corners, the FR-V will roll more than its rival, but it has ample grip and responds well to throttle inputs. While the steering is very light, small movements result in accurate changes of direction.

At £17,800, the ES is £65 cheaper, too, although steep servicing costs soon wipe out this advantage. As with the VW, the FR-V’s main opposition is from a rival closer to home. While the Honda Civic doesn’t offer the sixth seat, it does provide a huge amount of space for passengers and luggage – all for a price that the FR-V can’t match.

Chart position: 1WHY: Often overlooked by compact MPV buyers, FR-V is practical and solid. We see if it can match VW’s brand appeal...