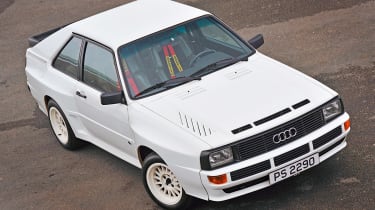 Meet the most extreme roadgoing version of the original Quattro! The Sport was rare, fast and highly sought after. Like other hi-tech models of the Eighties, it was a by-product of the need to homologate a competition car for Group B rallying, which called for 200 road examples to be produced.

It features a 307bhp 2.1-litre 20-valve engine, with an aluminium alloy block. To save weight, it has composite body panels, flared wheelarches and a 320mm shorter wheelbase. This renders the rear seats useless, but in 1984 the lucky few who bought a Sport cared little for practicality, as it is an out-and-out performance machine.

To some observers its big overhangs and more upright windscreen didn’t look that sporty, but with a 0-60mph time of only 4.8 seconds, it was quicker than a Lamborghini Countach of the same era. Twenty-five years after its launch, the Sport still feels incredibly fast. There’s lots of turbo lag, but once above 3,000rpm, the massive KKK turbocharger starts to have an effect and forward thrust is mighty. In 1984, this kind of performance meant only serious supercars could live with the Sport Quattro.

With its short wheelbase, serious power output and firm damping, the Sport is thrilling and challenging in equal measure. However, strong brakes – with advanced ABS – meant that it was more driver-friendly than rivals from the mid-Eighties.

At £50,000 the Sport was extremely expensive, especially as it lacked the visual beauty of a Ferrari and Lamborghini. But with only 214 ever made – just 164 reached paying customers, the rest were used as prototypes and competition cars – it was exclusive.

The car in our pictures is chassis number 141. It was originally sold in Switzerland and has covered only 32,000 miles since. Now an expensive collectors’ item, it’s worth in the region of £70,000 and remains the ultimate example of the Quattro. It wasn’t until the stunning R8 arrived in 2007 that Audi produced another car to match the impact of the Sport Quattro.

WHY: Faster than a Lamborghini and ultra exclusive, the Sport Quattro ticks all the boxes