One of the first passenger cars to feature four wheel drive, the UR Quattro's engine, looks and handling propelled it to legendary status 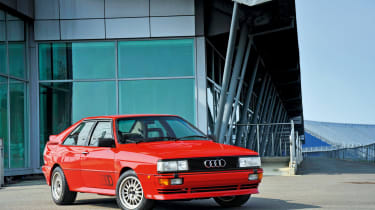 In the early Seventies, Audis were reliable, solid and worthy – but they weren’t exciting. So it’s no wonder the new Quattro stunned onlookers at the 1980 Geneva Motor Show.

It was named after the Italian word for ‘four’ and, with the exception of Britain’s little known Jensen FF sportster, was the first passenger car to feature permanent four-wheel drive. Powered by a 2.1-litre,10-valve, five-cylinder turbo engine that produced 197bhp, it provided strong performance, too.

Using the underpinnings of the Audi 80 as a starting point, the unique styling was the work of British designer Martin Smith. But it was how the Quattro drove that elevated it to legendary status. Road testers of the time raved about the extraordinary performance and grip. And it’s a testament to its abilities that even 29 years later, the Quattro still feels the part. The purity of its steering, superb traction and tuneful powerplant are a joy.

It will come as no surprise to learn that 11,452 Quattros were made by the time production ceased in 1991. During that period, the Audi gradually evolved. To improve its low-end torque, the engine was increased to 2.2 litres and then, in 1987, a new 20-valve version saw power increase to 217bhp. Visually, the Quattro changed little, but subtle styling differences distinguished each variant. Early cars had four separate headlamps, but they were replaced in 1983 by combined units. Then, in 1985, it got a new sloping grille to go with its trim and badging updates.

In true Eighties style, post-1984 models feature a green digital instrument cluster and even have a voice synthesizer to remind you to check the oil! In 1988, digital orange dials were introduced, and it’s these you can see on the gorgeous 1991 car in our pictures.

One of the last cars ever produced, it’s a classic example of a machine considered by many to be one of the most influential of the 20th century. It changed performance cars forever – and began the quattro legacy that lies at the heart of the Audi brand.

WHY: A revelation of handling, power and looks