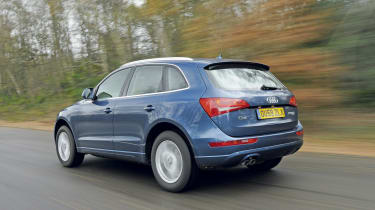 The trend towards downsizing means the Q5 now grabs more headlines than its bigger brother, the Q7 – so it’s just as well the Audi SUV has been warmly received. With the scaled-down looks of its stablemate it isn’t as bold as the Mazda, but it successfully blends chunky styling with a raised ride height.

A longer wheelbase and shorter overhangs also ensure the Q5 looks compact and well proportioned next to its Japanese rival. On the inside, rear legroom is on a par with the CX-7’s, but the large transmission tunnel limits comfort in the centre of the back seat.

However, it’s the sense of luxury which sets the Q5 apart from its competitor in this test. As we’ve come to expect from Audi, the cabin looks great and is wonderfully put together, while all the materials are a step above those used in the Mazda. The dash is similar in layout to the A4 saloon’s and the driving position is both widely adjustable and comfortable. And, thanks to the car’s tall stance, visibility is first rate.

The higher seating position is sometimes the only thing to remind you that you’re driving an SUV. As with the CX-7, the Q5 has been designed to excel on tarmac, and impeccable on-road manners are the result. Its superb body control is slightly better than the Mazda’s, so there’s less roll in tight bends, and the weighty and positive steering ensures the Audi corners accurately.

On the standard 18-inch rims of our test car, the ride quality is good, too. The suspension set-up is firm enough to make the vehicle feel sporty but well damped, and the Q5 copes with bumpy surfaces better than its rival.

While it doesn’t seem as light on its feet or agile as the CX-7, there’s little to complain about. The model is composed at speed, and the efficient stability control combines with quattro grip to make it reassuring to drive.

The six-speed manual transmission also has a slicker shift than the Mazda’s, and in our test the impressive braking was a match for the CX-7’s – as was the 2.0-litre TDI engine. It may be smaller than the Japanese model’s unit, but it still provided gutsy performance.

This meant the Q5 trailed its rival by only one-fifth of a second in the 0-60mph sprint and recorded stronger responses in our fourth and sixth- gear acceleration tests.

There are further advantages to Audi’s smaller capacity, because the Q5 is the cleaner choice when it comes to CO2 emissions. It also returned superior fuel economy for us, which reflects the two models’ official combined claims.

The flies in the ointment are the Audi’s hefty price premium and lower kit levels, but this can be slightly offset by impressive residual predictions of nearly 52 per cent – significantly higher than the CX-7’s. So, while the Q5 costs extra, it will also be worth much more when it’s time to sell. But is this enough to overcome that price difference and hand the Audi victory?