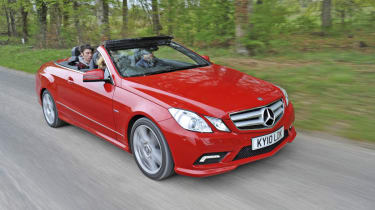 When it comes to chopping the roof off an executive model, nobody does it better than the Germans. The old Audi A4 Cabriolet still commands high prices on used forecourts, and the BMW 3-Series is our class favourite – complete with its folding metal roof.

Mercedes is no stranger to the convertible game, though, and the E-Class takes a traditional approach and uses a fabric hood. This not only looks stylish, but is more compact, so demands fewer compromises.

With the hood in place, you won’t mistake it for a Coupé, like you could a 3-Series, which is part of the Merc’s appeal.

After all, what’s the point in choosing a cabrio only for others to think you’re driving a tin-top?

Press the button to fold the roof, and the car is transformed into a sleek machine, as its shapely tonneau cover is revealed. The overall design is pure E-Class, but the aggressive details that accompany Sport trim show it in the best possible light. The cabin is less successful, as it borrows heavily from the saloon. Its uninspiring dashboard and run-of-the-mill switchgear lack the feelgood factor of an Audi A5 or the honed precision of a BMW.

There is plenty of space, though, with enough room for four to sit in relative comfort. Helping it to achieve this are the sculpted front seatbacks, which liberate a few vital extra millimetres of knee room behind.

But rear passengers will find that the roof’s metal framework gets rather close when it concertinas into the boot.

Once it has, the E-Class does a good job of preventing further distress, using a range of comfort-boosting tricks. The front seats, for example, can come with Mercedes’ clever Airscarf system (£350), which blows warm air through a vent in the seat to keep the chill off your neck. And if you’re in the back you’ll feel the benefit of the new Aircap set-up...

A button on the centre console pops up a deflector above the windscreen, while the glass panel behind the rear seats rises even higher. This helps cut turbulence and makes high-speed trips with the roof down better for those in the back. Effective ventilation and heated front seats boost its all-weather credentials, too. You do detect the odd shake over coarse or bumpy surfaces, and ride comfort from the Sport model’s suspension is firm, but it’s still a refined choice and lesser SE models should be more soothing.

The 250 CGI engine delivers reasonable pace, but the sluggish five-speed auto box is the only option, and isn’t as responsive as we’d like. However, if you simply want to cruise, the E250 is a classy number.

WHY: We’ve tested the E-Class saloon, Coupé and Estate – now it’s the turn of the Cabriolet. Sleek looks and clever technology aim to make it the best drop-top exec.