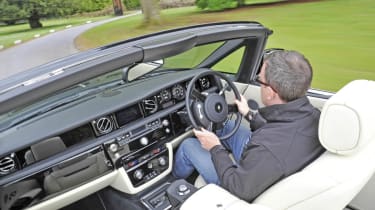 Where better place to start than with the ultimate convertible? Exclusivity and prestige come as standard on the Phantom, but does the luxury car live up to its massive price tag?

From the kerbside it’s hard not to be impressed. The huge vehicle measures more than 5.6 metres long and nearly two wide, so it stops traffic both literally and metaphorically. It’s a car you sense before you even see it. And when you do clap eyes on it for the first time, the chances are you’ll have to pick up your jaw from the ground.

From its sleek, elongated profile to its trademark grille and huge alloy wheels, the Drophead Coupé strikes an impressive pose. It’s tall, too – you sit at van-driver height – and its lofty waistline helps to raise it above the sea of other road users.

Even with its hood up, the Rolls looks rakish, but with the automated top folded bystanders are given even more reason to be inquisitive. The British firm excels in making you feel special behind the wheel, and the leather and wood-lined cabin has pedestrians craning their necks to see inside.

Simply climbing aboard is a novel process. Pull a big chrome handle to swing the huge rear-hinged door open. Once inside, it is closed by pressing a button on the waist rail instead of using a normal pull, and the door automatically shuts with a satisfying thud.

The pillowy-soft driver’s seat gives a wonderful forward view. Directly ahead is a thin-rimmed steering wheel. Traditional analogue dials indicate your speed – vital given the car’s other-worldly refinement – and how much power the huge 6.75-litre V12 has left in reserve.

Beyond that, the raked screen and long bonnet provide an intoxicating picture. The finishing touch is the Spirit of Ecstasy atop the grille – but if this is a step too far, simply press a button to lower her out of sight.

The cabin is trimmed in materials of the highest quality. In fact, the leather is so perfect that it looks almost man-made! There’s plenty of space in the back for two adults to recline on the wraparound rear bench.

Skinny passengers can even slide into place without requiring those in the front to move – although only when the roof is stowed.

The cabin isn’t flawless, though, as the old BMW iDrive-inspired interface isn’t as user friendly as the parent firm’s latest set-up and some of the controls – especially those for the electric seats – are over-complicated. Also, the roof brushes against rear passengers’ heads when it folds.

However, these are minor concerns, as the cabin certainly lives up to the Drophead’s luxurious reputation. You don’t get the kind of gadgets fitted to the Mercedes E-Class, such as pop-up wind deflectors.

Instead, the car relies on old-fashioned values to maintain a high-class feel – and this it achieves in spades.

Start the engine and it’s so quiet that you could be forgiven for thinking it hasn’t fired up. Meanwhile, the beautifully engineered automatic gearbox is so smooth to engage you don’t feel a thing as it slots into Drive. Pull away and the three-tonne Rolls-Royce moves off serenely and silently.

Hood-up refinement is impressive, and with the roof stowed those travelling in the front are well protected from the wind. Rear passengers aren’t so lucky, though, as things get pretty draughty here as speeds rise.

The mighty V12 delivers 453bhp and 720Nm of torque, and the Drophead sprints from 0-60mph in a claimed 5.6 seconds, but its upright seating and extreme comfort demand a more nonchalant approach to driving. Instead of gripping the thin steering wheel in the racy 10-to-two position, you end up holding the rim gently at 20-to-five as you navigate the gigantic machine.

In-gear responses are impressive and prolonged bursts of acceleration result in improbable thrust, but the Rolls is best suited to loping gently from corner to corner as you admire the view and take in the high-class cabin. Come rain or shine, it doesn’t disappoint.

WHY: Few cars at any price or from any sector of the market turn heads like a Rolls-Royce soft-top. The Drophead Coupé is the most expensive car we’ve ever tested.