They have off-road styling, but can two-wheel drive help crossovers achieve a supermini thirst for fuel? 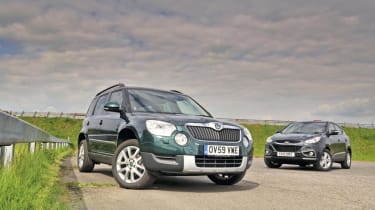 Off-road-inspired looks and elevated bodies give the latest generation of crossover models plenty of rugged appeal. Yet their two-wheel-drive transmissions provide the kind of fuel economy a genuine 4x4 could only dream of.

While the Skoda Yeti and Hyundai ix35 are available with all-wheel-drive, the most frugal models transfer power using the front wheels only.

Neither figure is especially competitive with the rest of the models in our mileage marathon. But would this be evident in our 60mph test?

The Yeti SE comes with cruise control as standard, and on our test loop, this made maintaining a constant speed easy. Only top-spec Premium versions of the ix35 are fitted with the labour-saving kit, though, so keeping our Style example cruising at a consistent pace demanded more concentration.

First to come to a halt was the Skoda, which stopped after 200.5 miles. The Hyundai didn’t continue for a much longer, covering 205.1 miles on its £20 of fuel. There was a mere 1.3mpg separating the two SUVs – only the cabriolets were more closely matched – and impressively, both had bettered their manufacturer’s official combined claim.

The ix35 recorded a 5.7mpg improvement over its official figure, averaging 58.6mpg in our test. The Skoda posted 55.8mpg – up 3.5mpg on the brochure figure. But the Yeti wasn’t the least frugal car overall. It edged ahead of the Peugeot 5008, travelling 2.6 miles further.

Neither SUV had the advantage of stop-start, so on our urban circuit, they struggled. The Hyundai was held back by its shorter gearing, and pulled higher revs at 30mph and 40mph – hitting its returns.

Both contenders have a long way to go before they can challenge the cars at the top of our ranking. So it willbe interesting to see if Skoda introduces an eco-friendly Greenline version of the Yeti.

For now, our test suggests the ix35 is the SUV that will keep you away from pumps longest. The fact it drives well, and has Hyundai’s best interior ever, only adds to the appeal.