Compact Execs- A4 vs 3-Series 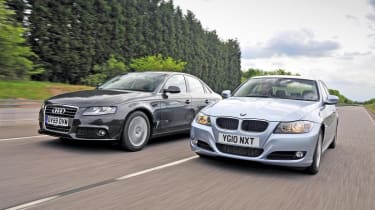 It’s no surprise that the UK’s most economical compact executive car wears a BMW badge. For the past few years, the German firm has set the pace in the segment thanks to its EfficientDynamics hardware. With stop-start technology, low rolling resistance rubber and brake energy regeneration, the brand has managed to offer low emissions and frugal economy without sacrificing driver appeal. And now it has launched the cleanest and greenest 3-Series yet.

However, BMW’s rivals are catching up. Audi was slow out of the blocks with fuel-saving technology, but in 2.0-litre TDIe trim the cleanest A4 has stop-start, reworked aerodynamics, longer ratios and lowered suspension, plus 61.4mpg combined economy. With 134bhp it lags behind the more costly 320d in performance terms, and it’s left trailing on emissions, too, at 120g/km.

Unfortunately for Audi, the BMW also displayed its economy advantage in our mileage test. The 3-Series lapped the MIRA loop with impressive refinement for 266 miles before it exhausted its 16.3 litres of diesel. In contrast, the Audi achieved only 207.9 miles at an average of 57.9mpg. Compare this to the 74.1mpg achieved by the BMW, and the A4 looks surprisingly thirsty.

The 320d also performed better on our simulated urban route. The stop-start system worked faultlessly from the third junction of the test, and aside from a small amount of judder through the gearlever at restart, its operation was smooth and unobtrusive. With the air-conditioning switched on, the A4’s stop-start didn’t work for the first 50 minutes of the urban drive, so it’s clear the Audi system doesn’t cope with electrical loadings as well as its rival.

And leaving the engine idling at junctions for that length of time will have an effect on fuel consumption over multiple trips.

In addition, the 320d’s powerplant feels smoother than the Audi’s TDI unit. So with the greatest range difference of all the pairings in this test, the BMW is the victor, although its higher price means company users will pay slightly more tax for the privilege.