Big sellers with big eco credentials, but the Ford and VW proved to be real long-distance runners 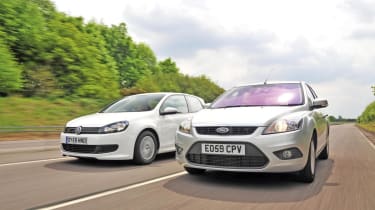 it’s a clash of the family car market’s economy titans! The Ford Focus and Volkswagen Golf are two of the best and most popular family hatchbacks around, so examples that offer 70mpg potential and emissions as low as 99g/km are big news.

We know what accomplished cars the Focus ECOnetic and Golf BlueMotion are from previous road tests. So, our team stocked up on energy drinks and prepared for long stints behind the wheel, as the fuel tanks were drained and charged with only £20 of diesel.

The Volkswagen has official combined consumption of 74.3mpg, so it ranks behind only the SEAT Ibiza in this test. Ford claims 74.2mpg, putting the Focus just a whisker behind.

The Golf proves that eco models don’t have to be dull and plain looking. Its low rolling resistance tyres are wrapped around alloy wheels, and it rides on 15mm lower suspension to aid aerodynamics. Add slippery aero bumpers, side sills and a unique grille, and the BlueMotion looks quite sporty.

The ECOnetic also benefits from an aerodynamic bodykit and lowered suspension, but alloy wheels are an option.

As we headed out on to the track with £20 of diesel on board, it was honours even. After hours of lapping the circuit, the Focus took victory, and the results left us speechless.

That gave the family hatches the longest ranges of all 12 cars – and they both excelled on the city loop as well. Warm ambient temperatures during our test put a heavy load on all the models’ air-conditioning systems – and in turn made some of the cars’ stop-start set-ups inoperable for a large proportion of the hour-long town drive. But impressively, this wasn’t the case for the Focus and Golf – their systems worked smoothly from start to finish.

Long gearing is another eco feature on both family hatchbacks – it allows them to achieve 90mph in third gear. Yet neither suffered from the sluggish low-speed responses we experienced in the SEAT Ibiza supermini.

The Focus serves up a little more sparkle in its handling, while the Golf scores with its superior refinement and more appealing interior. The fact the VW is the cheaper of the two also makes it the more attractive choice.

But when it comes to ultimate mpg performance, our test suggests the Ford is the long-distance champ.