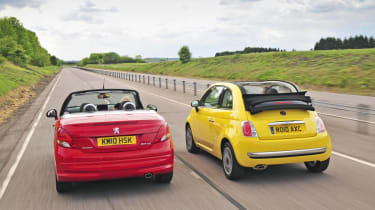 Buying a cabriolet is a decision of the heart, but that doesn’t mean you have to disengage your head completely. If you want both open-air fun and economy this pair should fit the bill, as each has a diesel engine under its bonnet.

Fiat added the 95bhp version of its 1.3-litre Multijet to the 500C range earlier this year, and along with the benefit of stop-start technology, the car promises combined economy of 72.4mpg – a 5.1mpg improvement over the outgoing model.

Emissions dropped from 119g/km to 104g/km, too, so the city car has an advantage over the 207 CC. The latter is powered by Peugeot’s established 1.6-litre HDi engine, but partly due to its heavy folding hard-top, its official combined consumption is 57.6mpg. And without the benefit of stop- start, it emits 127g/km of CO2.

We didn’t expect the French machine to match these official figures as we planned to conduct our test with open roofs, and the added aerodynamic drag this creates was sure to have an effect. But which of our drop-top duo travelled the furthest?

Sun lotion was definitely the order of the day during this test, because the Peugeot covered 207.4 miles on its 16.3 litres of fuel. Judging by the official claims it should have been trounced by its rival, but the 207 CC ran dry a mere 3.5 miles before the cheeky Italian model. The latter registered 210.9 miles.

The Fiat also disappointed on our simulated urban drive, as the stop-start set-up refused to kick in for the entire duration of our hour-long session. We performed this test with the roofs up and the air-conditioning systems on for all our cars, but even turning off the air-con and lights didn’t coax the stop-start into life.

Given that the 500 is a city car, its inability to cope with urban conditions in average summer temperatures suggests that owners will spend a lot of time without the benefits of the economy-boosting kit.

Along with stop-start, the Fiat’s useful eco gearshift indicator is another feature the Peugeot does without. The gearing of the two machines is very similar, though, so the 207’s extra power meant it felt more responsive.

Overall, picking a winner from this pair proved pretty difficult. The Fiat covered more ground, achieved superior economy and comes equipped with stop-start. However, our test suggests that this facility will be of limited benefit to motorists, while the Peugeot cabriolet exceeded its official consumption figures.

With only 0.9mpg between them, we’d opt for the 207 CC – especially as, unlike the Fiat, it’s a full, pillarless cabriolet.