There’s a clear eco winner as SEAT and Citroen come together – but is our champ a compromised choice? 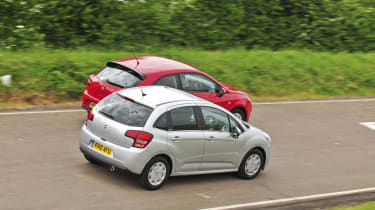 If you want a car that sips fuel, rather than guzzles it, small is best. Our 12-model line-up proves that big vehicles can be economical, too, but the cars with the superior fuel claims in ourtest are the superminis.

With an official combined economy figure of 76.3mpg, the SEAT Ibiza Ecomotive is the most frugal choice in our test. In three-door SportCoupé trim, it’s the cheapest, too, at £12,790, while emissions of 98g/km ensure it qualifies for free road tax.

Motoring simply doesn’t get much cheaper, but the Ibiza isn’t the only choice. The all-new Citroen C3 1.6 HDi Airdream doesn’t shout about its eco credentials, although emissions of 99g/km say otherwise. It’s exempt from road tax, too, while claimed combined consumption of 74.3mpg means it should run the SEAT close.

Take a close look at the Spanish car, though, and it’s clear it’s focused on delivering frugal economy. The deep front bumper and unique grille distinguish the Ecomotive from other models, and ensure it’s even more aerodynamic than the standard model – its drag coefficient of 0.30Cd is down from 0.33Cd.The Ecomotive is lighter, too, although crucially, it retains air-conditioning.

All of this planet-friendly effort paid off in our 60mph test, where the Ibiza managed 244.6 miles at an average of 68.1mpg. The less focused Citroen couldn’t match this, spluttering to a halt 9.6 miles short.

The question is, does the Ibiza’s single-minded pursuit of economy demand too many compromises in other areas? And the answer is yes.

The three-cylinder 1.4-litre TDI diesel engine is unrefined, while the long gearing of the five-speed transmission results in sluggish acceleration. Around our city centre test route, the Ecomotive felt lethargic and coarse. Plus, it’s not equipped with stop-start, which we think is a significant omission.

In contrast, you wouldn’t know that the C3 is tuned for economy.

It’s fitted with cruise control as standard, so maintaining our 60mph cruise was easier, and on our constant speed test it provided superior refinement. As with the Ibiza, it doesn’t get stop-start technology, and at 30mph its engine is revving 400rpm higher than the tall-geared SEAT. But while this hampers economy a fraction, the trade-off is the Citroen’s better throttle response.

So, while the SEAT was the more economical car, you pay the price with its sluggish responses and limited refinement. For us, then, the C3 is the better all-rounder.

Go Back toHow we did it...
Continue ReadingFamily hatches- Golf vs Focus