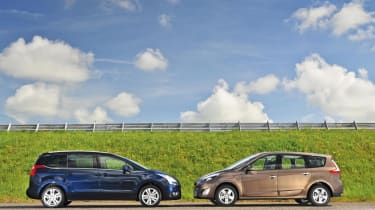 With boxy shapes and extra seating to carry around, you wouldn’t expect proper people carriers to perform well here. Their bluff designs are brilliantly practical, but can seriously dent fuel consumption, so our economy test promised to expose MPVs as thirsty machines. Or did our duo find the perfect blend of practicality and efficiency?

This pairing is an all-French affair, as we put the Renault Grand Scenic up against Peugeot’s new 5008. The former is fitted with a set of low-rolling resistance tyres to improve economy, while the latter boasts a drag coefficient of only 0.29Cd, making it one of the most streamlined models in the class.

It also has another trick up its sleeve, in the form of its Electronic Gearbox Control (EGC) set-up. This automated manual system promises reduced consumption compared to the manual version.

It all adds up to what should be one of the most closely fought battles in our test. Both cars have CO2 emissions of 135g/km and combined economy of 55.4mpg, so how did they cope on our constant 60mph loop? With £20 of diesel in the tank, the 1.6-litre HDi Peugeot was first to run out of juice. It covered 197.9 miles, which translates to 55.1mpg – only 0.3mpg short of the official combined claim, but the worst result for any of the cars in our economy marathon.

With the 5008 parked at the side of the track, we expected the Grand Scenic to peter out close by – so how much longer could the 1.5-litre dCi continue?

It eventually came to a halt 27.9 miles later, after covering an impressive 225.8 miles. That works out at 62.9mpg, placing the big MPV a creditable sixth in our overall standings – and ahead of the tiny Fiat 500C.

Neither of these cars is fitted with stop-start technology or tricks such as regenerative braking to cut fuel consumption, so our urban drive revealed few dynamic surprises. However, with an extra 5bhp over its Renault rival, the 110bhp Peugeot felt punchier on our city test.

Its automated gearbox made tackling our town route a breeze for the driver, too, although the 5008’s gearshifts are hard to anticipate. They’re also slow and jerky if you don’t lift off the throttle, so we’d give it a miss. The EGC box comes with cheap column-mounted shift paddles, and costs an extra £500, so we’d go for the cheaper manual version instead.

Yes, it’s more polluting, but the rewards from behind the wheel are worth the penalty in our book. The more economical Grand Scenic would be our choice here, though.

Our results suggest that it promises superior fuel economy, with minimal compromise when it comesto performance. The Grand Scenic also saw off the 5008 in a recent Auto Express twin test, so the Renault would seem to be the wiser option on every level.