Original model rewrote the family SUV rulebook. Is it still a winner in the face of fresh competition from Chevrolet? 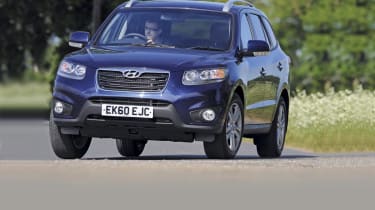 The Santa Fe made a big impact when it arrived in 2006. Far larger than previous Hyundai offerings, its family-friendly layout brought seven-seat SUV motoring to the affordable end of the 4x4 market.

It’s a relatively familiar sight on our roads now, but while its looks were refreshed in a mid-life facelift, it’s beginning to show its age. Lined up alongside the Captiva, it looks plain, especially from the back. Even so, its restrained styling is sure to appeal to buyers who find the Chevrolet’s grille too in-your-face. The two models are almost identical in scale, but there are crucial differences. Inside, the Hyundai’s middle row offers decent legroom, but the floor isn’t fully flat across the centre, and only the passenger side seat tumbles forward to allow access to the third row, so climbing into the rearmost seats isn’t as straightforward as in the Captiva.

You also have to use two levers to tumble the chairs, rather than one in the Chevrolet. The third row is best suited to children, as you sit low, with your knees high, and headroom is a fraction tighter than in the Captiva. As with its rival, all the seats fold flat with ease and boot space of 528 litres in five-seat mode is 51 litres more than in the Chevrolet.

Up front, everything is well put together, but the cabin lacks the modern look of newer Hyundais. The curved dash is old fashioned, while bland materials and some shiny plastics add to the dated feel. A generous spec compensates, with electrically operated and heated leather seats, cruise control and dual-zone climate control all fitted as standard.

When it comes to comfort, the front seats are short on support and set too high. The reach and rake of the steering wheel only operates within a small range, too, so the driving position isn’t perfect, either. On the move, the driving experience is undone by slow-witted steering, which requires lots of effort before you get a response. Up the pace, and the vague set-up leaves you feeling remote from the road, so it’s best to take a more relaxed approach.

This problem is compounded by the soft suspension, which permits too much pitch and wallow through bends. The ride is surprisingly hard given the Hyundai’s dull responses, though, and stopping distances were disappointingly long, with a lot of dive under heavy braking.

With 194bhp, the Santa Fe has a 13bhp advantage over its rival, but it was no faster than the Captiva in the sprint from 0-60mph. It did prove quicker in our intermediate tests, though. The automatic transmission’s manual mode delivers slow shifts, and using kickdown highlights the engine’s lack of refinement.

For all its dynamic flaws, the Hyundai is cheaper and better equipped than its rival, and it also has better residual values, but is this enough to keep it ahead of the Chevrolet?

Chart position: 1WHY: Seven-seat Santa Fe marked a step forward for family SUVs on its launch in 2006, and it remains a popular choice.