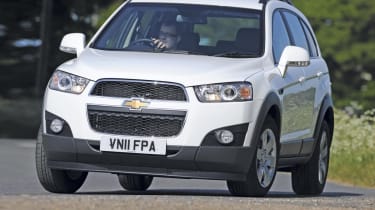 It pays to get noticed in the 4x4 sector – and with its massive grille, there’s certainly no mistaking the revised Captiva. Its bold new face gives the Korean-built 4x4 a similar appearance to the huge SUVs and pick-up trucks the brand sells on the other side of the Atlantic, and it’s sure to cause a stir over here.

Whether this is a good thing is a matter of personal choice, but the sculpted bonnet, revised lights and reshaped wings give the Captiva a radically different appearance to the mechanically identical Vauxhall Antara. Not only that, the Chevy looks more modern than the Santa Fe.

The changes have focused on improving the perception of quality, but the results haven’t been entirely successful (one of the letters of the Chevrolet badge fell off ours). While the seat fabrics are a step forward, and the ebony trim strip around the dash and on the doors looks relatively upmarket, the shiny silver centre console covering is cheap. And there are still too many brittle plastics dotted around the cabin.

The dash layout is simple, and a smattering of switchgear shared with the Vauxhall Antara does add to the impression of quality. So does the part-leather trim, and hide also features on the steering wheel, which adjusts for reach and rake. The range of movement helps you to get comfortable, and this job is made easier by the driver’s seat, which adjusts lower than in the Hyundai.

Annoyingly, a glaring oversight undermines comfort behind the wheel, as the large central storage cubby obstructs your elbow as you shift gears. This isn’t a major problem in the auto model tested here, but in a manual version we tried, it was a major irritation. The trade-off is a huge storage cubby between the front seats.

Matters improve in the back, as a family-friendly layout is one of the Captiva’s biggest draws. With a virtually identical wheelbase to the Hyundai, legroom in the second row is only marginally better than in its rival, but the Chevrolet has a couple of clear advantages.

For a start, the rear floor is fully flat, which makes the centre seat more comfortable for passengers. And, unlike in the Santa Fe, both outer seats in the  middle row tumble forwards, so you can access the rearmost row from either side of the vehicle. Once seated in the very back, there’s enough room for adults to undertake short journeys, and there’s more headroom than in the Hyundai. You sit close to the rear screen and luggage space in seven-seat mode is restricted to a narrow 97 litres – but that’s no worse than its rival. It’s worth noting, though, that you don’t get a spare wheel. The third row folds into the boot floor with ease, and doing so has a huge impact on boot space, with 477 litres available below the pull-out luggage cover.

As well as a focus on space, Chevrolet has worked on improving the chassis to broaden the Captiva’s appeal. Thicker anti-roll bars reduce body roll, while increased spring rates aim to sharpen cornering responses, but the changes haven’t transformed the Chevy into an entertainer.

It lacks the car-like agility of the best compact SUVs, and driving enthusiastically will see the nose wash wide as you tackle tight corners, while there’s little feel from the steering.

There’s less body roll in bends than in the Hyundai, though, and the Chevrolet’s four-wheel-drive system ensures decent traction. Hill descent control is standard for those who venture off road, but there’s no diff lock or low ratio transmission, so hardcore mud-plugging is off the menu.

Under the bonnet the 2.2-litre diesel engine is more refined than its rival’s similarly sized unit, but there is a slight hesitancy in the power delivery at low revs.

Compared to the Hyundai, vibrations are better isolated from the cabin, but performance is closely matched. At the test track, the pair recorded identical 0-60mph times of 9.2 seconds, while the more powerful Santa Fe had a small advantage during our intermediate tests. Choosing the automatic gearbox adds £1,550 to the cost of the Captiva, but after experiencing the incredibly notchy manual, it’s money well spent. Opting for the self-shifter sees emissions rise from 174g/km to 203g/km, though, which is 6g/km higher than the automatic Hyundai.

Poor residuals are another concern, but Chevrolet’s current five-year warranty, servicing and recovery deal matches the Hyundai’s cover. The question is, will that be enough?

Chart position: 2WHY: Captiva has fresh looks, more power and a revised cabin. Prices have increased – so does it still represent value for money?