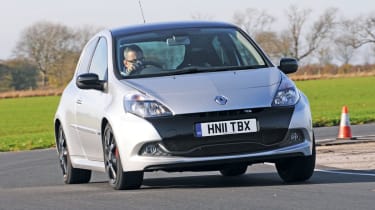 The technicians at Renaultsport are the master craftsmen of the hot hatch trade, and the Clio 200 is arguably their finest work.

From the outside, the attractive standard Clio shape has been gently beefed up with bulging arches and a wider track. Clever detailing like the F1-inspired front bumper insert and rear diffuser give it a purposeful look, while the wheelarch vents are another smart touch.

Inside, this simple approach continues and the Clio’s cabin doesn’t feel as overdone as the Corsa’s. It isn’t upmarket, but it’s solidly put together.

Better still, the low-mounted figure-hugging Recaro seats, chunky wheel and perfectly positioned pedals give a great driving position. Plus, the Clio doesn’t suffer from restricted visibility due to thick A-pillars like the Corsa.

The split rear seats fold, while the boot is deeper than the Corsa’s, but there’s not much to choose between the pair when it comes to practicality.

Thanks to its firm suspension, the Renault isn’t as comfortable to live with on a day-to-day basis. To be fair, it’s fine on smooth surfaces, and even on bumpy back roads it’s not unbearable. The real issue is on the motorway, where you find yourself hopping up and down in your seat as the suspension resonates to imperfections in the tarmac.

On top of that, there’s more road noise than in the Corsa, while the closely stacked gear ratios mean that 70mph equates to 3,200rpm, so you’re aware of the engine at cruising speed.

But what an engine it is. Peak power of 197bhp is produced at a heady 7,100rpm, and it thrives on hard work. As it lacks the low-down turbo grunt of the Vauxhall, it trails on in-gear pace, but the snappy gearshift action, throaty soundtrack and rasping exhaust note mean that you enjoy taking every gear to the red line.

Most importantly, the controls and chassis are alive with the feedback that’s missing from the Vauxhall. There’s loads of grip, body control is superb and the Clio rewards precise driving with razor-sharp responses.

Push harder and the front tyres scrabble for traction sooner than those of the Vauxhall, with its limited-slip differential.

The Corsa has greater high-speed grip, too, but you’re only likely to discover this on a race track. And even then, the Clio will be more engaging. Thanks to its edgier rear end, you can steer the car on the throttle by adjusting the accelerator through a corner.

The brake pedal is firm under your foot and stopping power is excellent, while the stability control isn’t too intrusive and can be disengaged if you want.

The Clio is fast, precise and agile on every type of road, and there are few cars that can match its sheer fun factor.

Chart position: 1WHY: Only 50 Silverstone models have come to the UK, but you can still get one, as they haven’t sold out yet. We wanted to see if it is worth the investment.