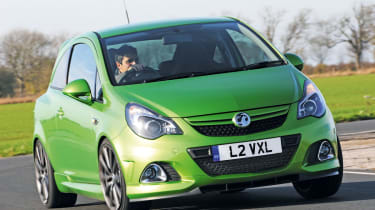 A car as racy as the Corsa VXR Nurburgring Edition has to look the part, but there’s a fine line between tastefully sporty and boy racer.

Vauxhall has added an extended splitter and twin stainless-steel exhausts to the standard car’s bulging bumpers, deep sills and twin-arm mirrors. The lower ride height and 18-inch alloy wheels provide it with a planted stance, yet the car still looks bulbous and heavy.

This is an impression that continues inside, where you won’t find a stripped-out track special cabin. In fact, with its heavily bolstered Recaro sports seats, chunky leather gearlever and thick-rimmed multifunction steering wheel, it’s as though the Corsa VXR wants to be an upmarket GT car. Our model added to this with a £1,045 leather upgrade and £750 touchscreen navigation.

The piano black trim looks smart, but the design isn’t perfect, with fiddly radio buttons and low-set climate controls. Plus, the material quality in out-of-the-way areas is patchy. As a result, the cabin isn’t totally convincing, and the Nurburgring plaque and extra stitching of the special edition seem contrived.

The decent driving position compensates for these failings, and the seats are better suited to long journeys than the harder Recaros in the Renault. But the reality is that tweaks to the cabin and styling are only sideshows to the much more important changes underneath.

For starters, the extra 13bhp pushes the Corsa’s output past the magic 200bhp mark for the first time, while an additional 20Nm of torque enhances the already punchy power delivery.

Peak torque arrives at only 2,250rpm, so while the normally aspirated Renault needs to be worked hard, the turbocharged Vauxhall delivers its power low down. This gives it the upper hand for in-gear response and makes for effortless progress.

On the test track, we felt a slight hesitation at around 5,500rpm and didn’t get close to Vauxhall’s claimed 0-62mph figure of 6.5 seconds. But when it came to traction, we could immediately feel the benefit of the car’s new limited-slip differential.

Due to the relatively sudden nature of its delivery, the standard Corsa VXR struggles to get its power down cleanly.

In the Nurburgring Edition, when you press the throttle exiting a long corner, the nose doesn’t push wide, making it easier to keep a tighter line than in the Clio. This great mechanical grip means the stability control rarely needs to intervene in the dry.

But the dynamic tweaks don’t stop there. Vauxhall commissioned suspension specialist Bilstein to develop a tailor-made damper and spring package. The car rides 20mm lower at the front and 15mm lower at the rear than the standard VXR, and it now turns into corners and grips harder than almost any other hot hatch.

With virtually no body roll in corners, all four tyres retain a large contact patch with the tarmac. The car won’t bounce on its dampers and doesn’t feel as nose-heavy or slow-witted as the standard Corsa VXR.

On the road, there’s grip to spare, while on track it can carry more speed when entering a corner than the Renault. But crucially, only owners who head to the track are likely to notice the extra grip compared to the Clio.

When the cars are driven back-to-back on the road, it’s apparent straight away that the Vauxhall lacks the Renault’s fun factor. There isn’t a lot of feel through the steering, so while it reacts sharply, you feel detached. Plus, it lacks the snappy gearshift you’d expect from a hot hatch.

But the Corsa is more refined and civilised than the Clio. There’s less road noise, and while the ride is rigid around town, the dampers work well at higher speeds. The Vauxhall doesn’t react to every bump, so it’s more comfortable and a better all-rounder than the Renault.

Although the Nurburgring offers curtain airbags, cruise control and air-con, the regular VXR has all the same kit for £3,395 less. But the £22,295 price buys a hot hatch that’s tangibly better than the standard car.

Chart position: 2WHY: Hot Corsa was developed on, and named after, Germany’s Nurburgring track. It has more power than the standard VXR and a substantially enhanced chassis.