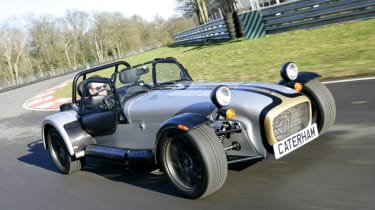 IT’S based on a design that will celebrate its 51st anniversary this year, but the Caterham Roadsport couldn’t be any more up to date. The smaller capacity 1.6-litre unit is cleaner and more efficient, but it hasn’t compromised the Seven’s pure driving thrills – no other road car can match it.

HERE’S a car that proves going green doesn’t mean giving up on thrills. The new Caterham Roadsport blends a 150bhp Ford Sigma engine with the firm’s Lotus Seven-inspired chassis to create a car that’s brilliant fun to drive and also has low emissions.

And although nobody would suggest the two seater was conceived as a planet saver, it’s a welcome coincidence that its light weight means it doesn’t need a gas-guzzling engine to provide driving thrills.

With a kerbweight of 550kg, the Roadsport has a power-to-weight ratio of 270bhp per tonne, which is the same as a Porsche 911 GT3. As a result, the sprint from 0-60mph is covered in exactly five seconds, making this car nearly as fast as its German rival!

And on the road that makes a real difference, as the 150bhp engine is well equipped to exploit the capabilities of the chassis, without being overwhelming.

The small-circumference Momo steering wheel has masses of feedback and a perfectly judged turn-in. Watching the wheels and suspension move up and down with the undulations of the road adds to the sense that you are closely involved in the driving experience.

But while the Roadsport is a brilliant driver’s car, it’s when progress isn’t so raucous that you begin to appreciate the Seven’s classic roots. A long bonnet, wide turning circle and sensitive throttle mean it’s a struggle to drive in slow traffic.

But comfort is the last reason why you would buy a Caterham. The Roadsport 150 offers a blend of price, performance and thrills that few can match.