We drive the British-built Caterham 7 R600 racer, which offers supercar-beating thrills on track 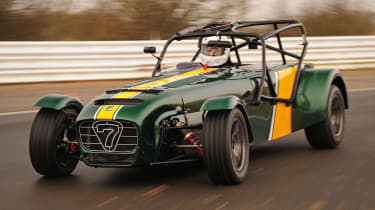 The R600 can only be used on a track right now, but it would definitely work on the road, too. The supercharged engine is hugely powerful, yet also very usable at low speeds. This car demands respect and care on a track – but in the right hands it’s incredibly good fun.

It may look like a retro fun car, but the Caterham 7 R600 is a serious piece of kit, accelerating quicker than any sports car this side of a Bugatti Veyron.

It’s powered by a supercharged 2.0-litre, 275bhp Ford engine and weighs only 550kg. That gives it a power-to-weight ratio of 500bhp per tonne – better than a Ferrari 458 or Lamborghini Aventador.

But while they have leather seats, satellite navigation and air-conditioning, the Caterham most definitely doesn’t. You get a steering wheel, gearstick and rev counter, and not much else.

This is a proper hardcore track day racer: its most luxurious feature is the comfortable seat, which offers a surprisingly generous amount of adjustment.

And if the stripped-out interior and roll cage don’t convince you that the R600 means business, its performance figures will. It takes a ridiculous 2.6 seconds to cover 0-62mph and 0-100mph is done in under seven seconds. Top speed is 153mph, but you’ll have to guess when you’ve hit it, because the R600’s dash does without a speedometer.

Achieving those figures isn’t as straightforward as slotting the car into drive and mashing the accelerator. You really have to work the R600, which gets a six-speed sequential gearbox but absolutely no driver aids.

That’s daunting when you’re on a wet race track, but it’s also exhilarating. The raucous engine responds to the slightest brush on the accelerator, and things get steadily more intense as you flat-shift up through the gears. Yet while you don’t need the clutch for shifting up, you do need to remember to use it as you go down through the gears. This set-up takes some getting used to, but it’s extremely effective once you’re racing.

You approach corners with caution before pressing gently on the non-ABS brakes and then turning in to find plenty of lateral grip. The steering is quite heavy, yet very accurate, which boosts your confidence further. You obviously have to be careful with the throttle, but string together a tidy lap and the R600 is endlessly rewarding.

At £44,995, it’s relatively good value, too, although for now it can only be driven on a track. Caterham hasn’t ruled out producing one for the road, but until that happens you’ll have to get your roadgoing thrills from the 263bhp R500 Superlight.