Changan is one of China’s biggest carmakers, with plans to shake up the automotive market. We visited the brand’s HQ to investigate... 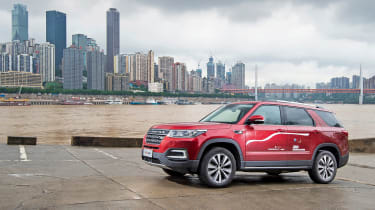 Despite their best attempts, the Chinese are yet to crack the European car market. Changan reckons it has what it takes to change that, however, and a range of new crossovers and SUVs could be just what the company needs to topple the best from the West.

To learn more about the maker and sample some of its latest products, we took a trip to its global headquarters in Chongqing, south-west China. The programme would allow us time behind the wheel of the firm’s latest Nissan Qashqai-rivalling CS55 SUV, while also giving us an opportunity to grill bosses at its fast-paced research and development hub – a place working hand-in-hand with similar centres in the UK, US and Italy.

Changan as a brand is more than 150 years old, and has been building cars in various forms since the fifties. Thanks to joint ventures with the likes of Ford, Mazda, PSA Peugeot-Citroen and Suzuki, the company assembled more than three million vehicles in 2016 – becoming China’s fourth biggest auto producer by volume. But success in its home market isn’t enough. State-owned Changan Automotive has global ambitions, and having already made it to much of South America, Russia and the Middle East, it now has its sights set firmly on Europe. 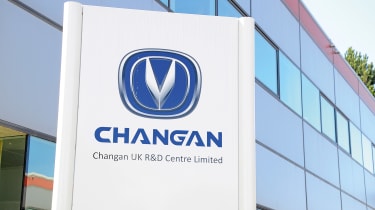 We’re a notoriously fussy bunch, though, and with our really high standards on equipment, quality and driving dynamics, it’ll take a special product to steal sales from manufacturers such as Renault, Nissan or Volkswagen – and an even more outstanding one to lure buyers from premium alternatives such as Mercedes, BMW and Audi.

After a 12-hour flight from London to Chongqing via Helsinki, we’re whisked away to apply for our Chinese driving licence. Even though the UK claims to have one of the lowest accident, injury and fatality rates in the world, a British photocard won’t suffice on Chinese roads. An entire day is quickly consumed jumping through hoops and signing pieces of paperwork. Eight hours later we’re handed a two-inch piece of plastic – which is valid for just three days’ driving in China.

The next morning we board a bus to Changan’s extensive test facility in Dianjiang, two hours northeast of Chongqing. The centre was finished in 2013 at a cost of nearly 1.3billion Yuan (around £150million). It covers an area of 2.24 square kilometres and boasts everything from a four-lane high-speed bowl to a dynamic handling course, a skid pan and a mile-long straight. There are more than 60 ‘special’ surfaces to accurately assess areas such as refinement and ride quality, too. 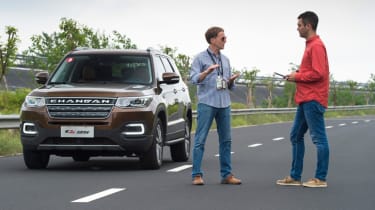 As we’re guided around the grounds by chief engineer Gordon Cook, we’re given a chance to quiz the British-born ex-Ford handling expert on what he thinks Changan needs to do to hit the big time in Europe. “Our cars have been tuned for the domestic Chinese market,” Cook says. “But the enthusiasm for better cars is really strong. [Changan] wants it all really, really quick.”

He’s the man who was, in part, responsible for the fine-handling previous-generation Ford Fiesta, before he took the plunge and moved to Chongqing. Talking to Cook offers us a fascinating insight into a relatively unknown company (in Britain, at least), whose processes couldn’t be more different from those to which we’ve become accustomed. Cook is confident Changan can adapt to European tastes, though, insisting the Chinese penchant for shorter four-year complete model cycles allows for faster development than a European or Japanese maker could ever manage.

“These cars are OK for China, but Chinese buyers want different things,” Cook explains to us. “The goal is to go from a prototype mule to production car in two years. Our guys just go for it – that is why we’ve made such tremendous strides already.” 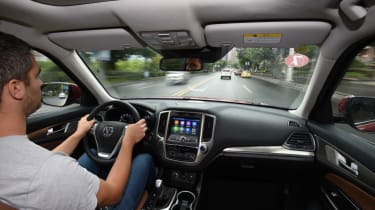 We explore the centre from top to tail, and test the firm’s latest CS55 and CS95 SUVs on a host of roads, tracks and surfaces. This teaches us a lot about the cars, and while neither is as sharp or fun to drive as their European equivalents, both are surprisingly capable over some of Dianjiang’s most challenging terrain.

However, before any car is trialled here, it goes through weeks of tests at the maker’s domestic R&D centre back in Chongqing. It’s a bustling technology hub with European-standard equipment – including a crash test facility that focuses on making Changan’s new cars as safe as their German, Japanese or British competitors. Hui Zhao, Changan’s vice-president for engineering and research, tells us the manufacturer crash-tests 300 cars on site every year, and that “every component” is related to the overall safety of the car.

His team measures models against global makers such as Ford, and by using high-strength materials and active accident mitigation systems such as autonomous emergency braking, hopes to ensure Changan’s cars are as safe as they can be. “We look at passive safety and active safety,” Hui Zhao tells us. “When these combine, we can say Changan is the safest in the industry.” 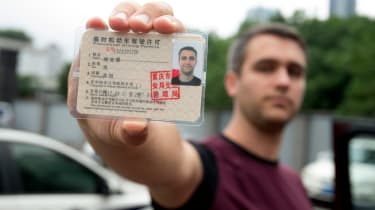 An unfortunate roll-over incident in Dianjiang at the hands of an Italian journalist, with the car’s ESP systems switched off, put the brand’s safety credentials to the test. And the almost unmarked car and uninjured occupants demonstrate exactly how tough the Chinese-built models are.

Hui Zhao’s comment is a big claim, indeed, and while China’s independent crash-test body C-NCAP sets slightly different standards to the Euro NCAP organisation we have over here, its stringent criteria follow similar guidelines. Engineers at the R&D centre can replicate everything from side impacts to frontal crashes. Changan’s mid-size CS75 was recently awarded an overall five-star C-NCAP rating.

The European and US benchmarking continues over the road in the company’s noise, vibration and harshness (NVH) laboratory. Inside, we find one of the manufacturer’s anonymous saloon cars hooked up to a dynamometer in a huge semi-anechoic chamber that is designed to accurately measure every sound, creak and rattle emanating from the various prototypes. The clever set-up can run at speeds of up to 124mph, and replicate varying road conditions. 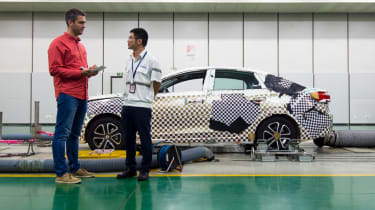 Engineer Jia Wenyu said: “Our CS95 SUV is on par with a Ford Edge for quietness. We measure the sound quality of everything – even the way the doors close.” It’s evident Changan and its talented team are keen to leave no stone unturned. And as our drive of the smaller CS55 confirmed last week, with a few tweaks to the steering, gearbox and suspension, we believe it would stand a good chance in the crowded British car market.

Conservative estimates from members of management suggest a UK launch is on the cards, although perhaps not for some time. Some consider 2025 or even 2028 to be a realistic timeframe. But with almost-competitive products already on sale in China, and short lifecycles allowing for rapid development, there are hints that Changan’s European debut could come sooner rather than later.

With no complaints about interior quality, practicality or price, there’s little reason why Changan couldn’t steal sales from some of the automotive industry’s most established, successful and trusted brands in the years to come.

Do you think Changan will be able to break into the European market? Let us know in the comments below...