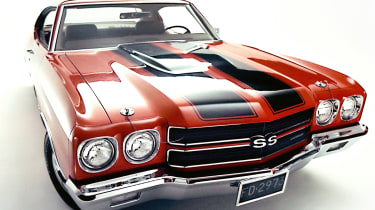 Chevrolet’s first foray into the Muscle Car world was with the Chevelle Super Sport (or SS) introduced in 1964. Early in its life it was significantly out-gunned by the Pontiac GTO, but it wasn’t long before Chevy started turning up the wick.

By 1970, the Chevelle SS had reached its most outrageous specification, with a huge 454 cubic inch (7.5-litre) big block V8 that could be ordered with an advertised 450bhp and 500lb ft of torque.

With a 0-60mph time of a little over 5 seconds, the 1970 Chevrolet Chevrolet SS 454 was one of the fastest accelerating road cars in the world, and is hugely collectable today.